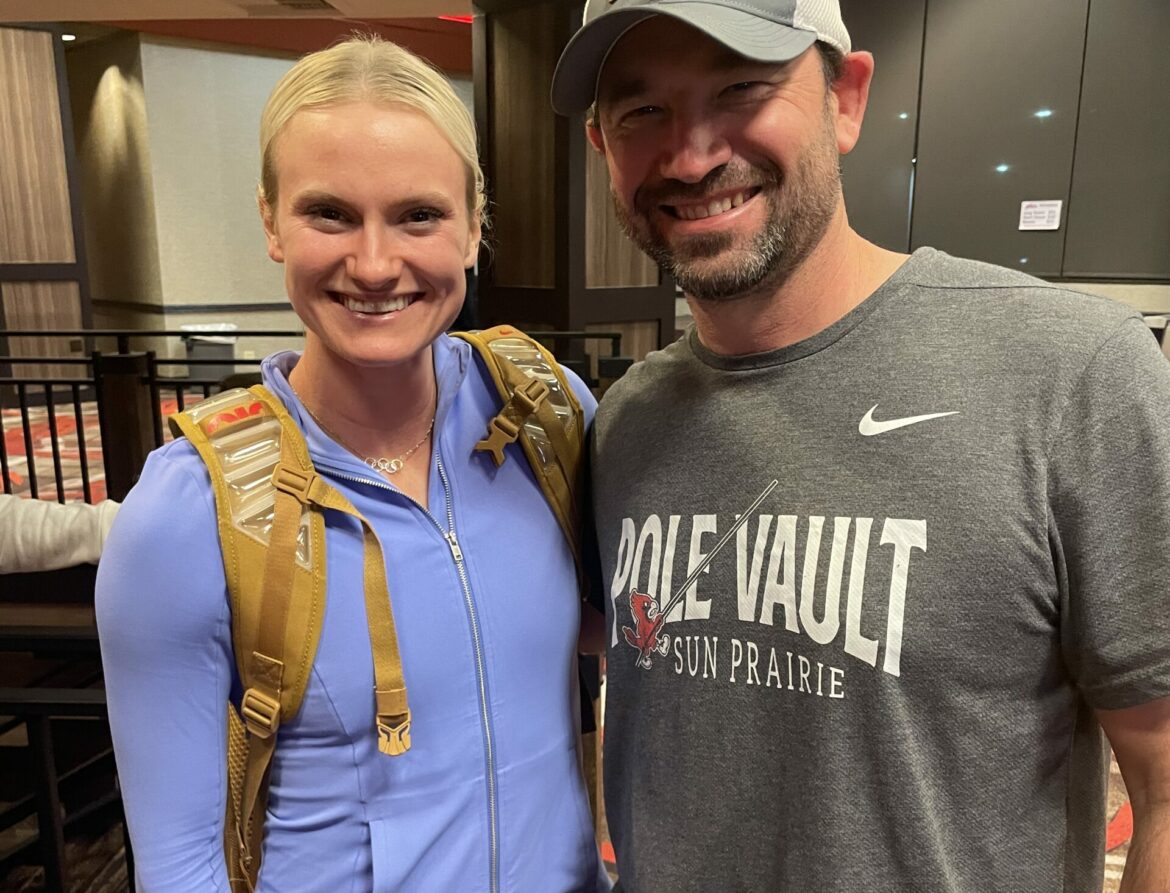 Joel Block creates access and inspiration in the pole vaulting community amidst the pandemic.

MADISON, Wis. – When you hear the name Joel Block, you’re bound to hear about a Sun Prairie High School track and field coach who has made monumental strides in the American pole vaulting community.

Despite being named the 2021 High School Coach of the Year by USA Track and Field Pole Vault Department, Block’s legacy goes beyond pole vaulting. While he has played a monumental role in the development of the field, Block is much more than a title: he is an educator, mentor and friend.

Block’s humble beginnings trace back to the southwest corner of Wisconsin. He grew up in Lancaster, Wisconsin, a town of only about 4,000. The community was close; everybody knew everybody.

Sun Prairie High School’s head track and field coach, Douglas Maughan, understood this better than anyone else. He grew up alongside Block in Lancaster; they played sports and tackled high school together.

“If I have to make a big decision, he’s the guy I’m calling,” Maughan said. “The great thing about Joel is that he pushes you to really be the best you can be. He’s my best friend, [even today].”

It was in his hometown that Block discovered the world of pole vaulting, a sport that he had been exposed to in his younger years. He had found inspiration early on through a simple framed photograph in his childhood bedroom. Sitting among other awards, the photograph showed his father holding a pole vault pole. At the time, Block hadn’t known the sport’s significance.

“I knew what pole vaulting was, but I didn’t know what it took,” he said.

Throughout his early athletic career, Block found immense support from his coaches, consuming vast amounts of knowledge and growing admiration along the way. After placing sixth in pole vaulting at the annual Wisconsin State Track and Field competition his senior year, Block knew that that wasn’t the end of his pole vaulting career.

“I felt like there was unfinished business,” he recalled. “I knew I wanted to go to school to [eventually] become a coach, because my coaches really had become my mentors.”

This motivation and drive to become like his mentors pushed Block through his years as a student-athlete at UW-Stevens Point. He competed as a decathlete, which allowed him to learn the full scope of track and field and what it had to offer.

Upon graduating from Stevens Point, Block took up various teaching positions across the state, moving from school and track programs every couple of years. He gained valuable experience, coaching a number of athletes to the state meet while “rewriting record books” at a number of schools.

However, it wasn’t until 2010 that Block’s life was forever changed. After applying with low hopes of getting in, he was accepted to attend the Emerging Elite Coaches Clinic in Chula Vista, California.

One small decision opened up monumental doors for Block. While at the clinic, he met Brian Yokoyama — National Chairperson for USA Track & Field Men’s and Women’s Pole Vault. The two became close throughout the clinic, and Yokoyama knew instantly how extraordinary Block was.

“I could tell right away that he was a guy that had a lot of passion for pole vault,” Yokoyama said. “You could tell that he was someone really special. I knew that he could help us with USA pole vaulting.”

Yokoyama invited Block to attend the annual National Pole Vault Summit in Reno, Nevada the following year, a first for the young coach. To date, Block has attended the summit every year following 2011, speaking and teaching others at the event.

For Yokoyama, it’s easy to see how Block’s work ethic is unmatched.

“It’s not about how high the vaulter you coach, it’s about the quality coaching given,” Yokoyama said. “In that respect, I think he’s one of the best coaches in the world. Hands down.”

It was this work ethic that pushed Block through his most challenging endeavor yet: the COVID-19 pandemic.

In the early months of 2020, Block was the current assistant track and field coach at Sun Prairie High School, a position that he holds today. It was after track practice shut down in March 2020 that Block realized he had to  switch up his approach to coaching. In-person training could no longer happen, but his athletes still needed to learn.

His solution? A YouTube series dedicated to educating athletes on everything pole vault.

“I wanted to learn from the best in the world, and I wanted to have a front row seat,” Block said.

The series was an instant hit, racking in thousands of views from across the world. Block hosted world-class athletes and coaches, including Olympic pole vaulters Sam Kendriks, Mondo Duplantis and many more. The series was one of the developmental reasons for Block’s earning the2021 USA Track & Field Coach of the Year. But the inspiration for the series was much simpler: to bring a community together.

“I didn’t win this award because I’m the best high school pole vault coach in the country or because I coached thousands of state champions. It’s really because I had a vision and a dream to connect as many people as possible in a very difficult time,” Block said.

As someone who has been with Block through it all, Maughan isn’t surprised. “He’s an innovator, he thinks outside the box for everything,” he said. “As an educator and coach, I feel as though I constantly have to be innovating the program to stay ahead of him.”

To others, Block’s resilience in the pole vaulting community is not something to disregard. Despite Block not coaching world-class athletes, Yokoyama knows just how influential he is.

“If Joel was working at a university or working with world-class athletes, I wouldn’t want to coach against him,” he said. “That’s the bottom line. He knows what it takes.”

“He’s just invaluable,” Yokoyama said with a smile. “We wouldn’t be where we are without him.”