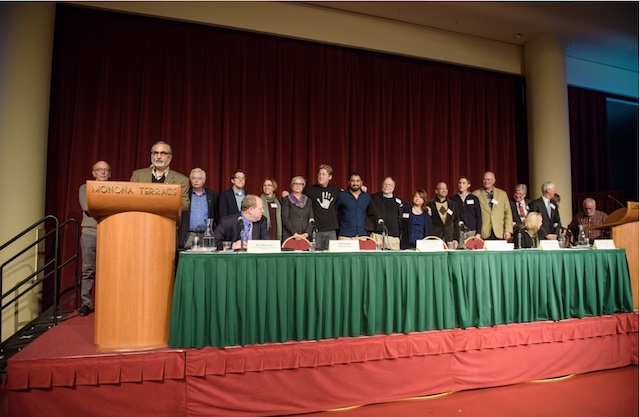 “Hate is a willful denial of compassion.”

These are the words of Arno Michaelis, former member of one of the largest racist skinhead groups in the world.

Michaelis willfully denied compassion in his life, letting his personal suffering develop into a terrible rage that caused him to harm many innocent people, as well as many of his loved ones.

It was not until a Jewish man, belonging to a group that he claimed to hate, treated him with the kindness that Michaelis never treated that man with, that he realized he needed to change.

Michaelis’s speech caused an emotional stur among the attendees of a United Against Hate event last month at the Monona Terrace. There were few dry eyes in the room as he shared his story about confronting his hate and suffering, which led Michaelis to start Serve 2 Unite, and become an advisory board member of We Are Many-United Against Hate.

We Are Many-United Against Hate, defines itself as an “anti-hate community” that is seeking “equal protection for all” and aims to defeat the bigotry and racism that runs through our country. The group regularly holds events to discuss ways that we, as individuals and as a community, can help fight against hateful actions and words.

Founder of United Against Hate, Masood Akhtar, explained that the purpose of the event was to encourage Americans to join into one community to fight against bigotry in this country.

“Hate is not a Republican issue. It is not a Democratic issue. It is a human issue.” Akhtar stressed the importance of unity and diversity as a foundation of both the organization and our country.

The leaders of of United Against Hate have been battling against bigotry from an early age.

Growing up in an Italian family within the Greenbush neighborhood of Madison in the late 50’s, Nino Amato, public policy chair of the organization, witnessed many acts of hatred and discrimination. Amato vividly recalls seeing the KKK march right across his street yelling ethnic slurs. Amato has been involved in civil rights activism ever since, and supports the work of United Against Hate.

“The key is to recognize the symptoms of hatred and bigotry,” Amato said.

United Against Hate Organization is making strides at bringing different kinds of people together to promote peace and respect.

We Are Many-United Against Hate is committed to speaking out with loud voices about unity, diversity, and love, to overpower the voices preaching hate and bigotry. The organization has provided a platform and a forum for people’s voices to be heard, and in doing so it has brought the people together within the city of Madison, as well as beyond its bounds.

In the next year, the organization plans to influence policy changes in the city regarding hate crimes and other acts of discrimination that are not given the attention they truly need.

For more information about We Are Many-United Against Hate, visit their website athttps://www.united-against-hate.org.