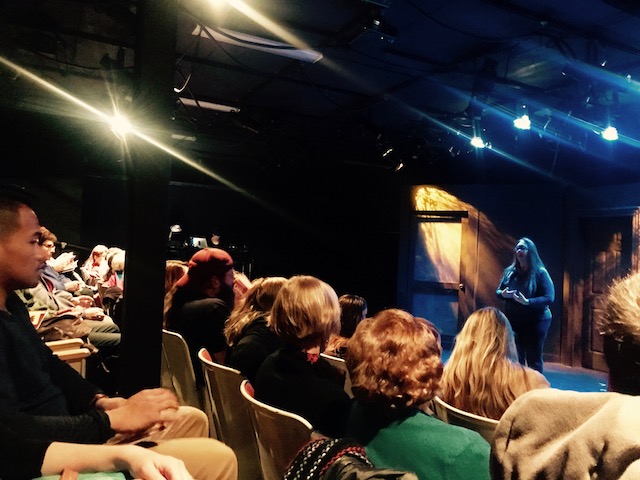 She courageously told the director of the next show that she would under no circumstances do props anymore, giving him a list of things she would happily do instead. He agreed. The next thing she knew, she received the assignment list for the company’s next production, and she was listed as the props master.

Rasmussen’s experience as a woman having her hard work and opinions disregarded in a male-run industry is all too familiar. An ongoing study reveals that women have never held more than 27 percent of leadership positions in American nonprofit theater.

Rasmussen’s personal encounters with these disparities fueled the idea to start a women’s theater with other members of the local theater community who shared her desire for change.

Before she could see her ideas come to life, Rasmussen passed away unexpectedly in 2007. However, her contributions to Madison’s theater community persisted. The Kathie Rasmussen Women’s Theatre was established in 2008 to honor her shared vision of giving women in theater equal opportunities.

Today, the likes of Harvey Weinstein, Bill Cosby, James Toback and so on, grossly highlight the deep-seated system of corruption affecting the entertainment industry at large. Powerful men are increasingly being condemned for exploiting their leadership positions to oppress women. The need for women to be equally represented in the male-dominated industry has thus become overwhelmingly clear.

The Kathie Rasmussen Women’s Theatre, “Krass” for short, has been a leading advocate for this change. The nonprofit community theater company exclusively produces plays written and directed by female playwrights and directors. The company is a part of a larger collaboration of six smaller entertainment groups that perform at the Bartell Theatre downtown.

One of the company’s founders and its current Artistic Director, Jan Levine Thal, discussed the significance of women’s theater.

“So-called ‘women’s theater’ is good theater,” Thal said. “Women playwrights write about all sorts of topics, not just topics for women. My contention is that there are great plays written by clever women out there who can’t get a second shot. Those are the kinds of plays we want to put on.”

The company’s mission is to support the equal representation of women in theater through promoting their work and prioritizing their voices. As female playwrights and directors assume leadership positions traditionally held by men, they are given opportunities to reshape prevailing ideologies about women and gender norms.

Thal emphasized the company’s distinct power to effect social change as it uses entertainment to attract the public and present them with truth, stimulating discussions beyond theater.

“In history, theater has caused great upheaval now and then,” Thal said. “Can any one play, event, demonstration or campaign change the world? Paula Vogel's Pulitzer Prize winning play, How I Learned to Drive, depicts sexual abuse within a family. Clearly, sexual abuse hasn't ceased. But her play, along with countless other events, I believe, has helped empower survivors to come forward.”

Most recently, the company finished its fall production of The Mineola Twins, a socio-political satire written by the female playwright, Paula Vogel. The play was directed by a local female director, Julie Johnson.

During each performance of the play, Johnson sat alongside audience members. Her vibrant presence and commitment to her work was apparent as she laughed whole-heartedly at every punchline the actors delivered throughout the show.

The Mineola Twins examines women’s experience in post-World War II America. The story is told through the lives of two identical twins who each embody the extreme opposite ends of the polarized political system.

“One reason I wanted to do this play is because its themes still apply today,” Johnson said. “One line mentions standing at the national anthem during football games, and it was written over 20 years ago. It shows how we need to learn from history rather than repeat it.”

One of the audience members attending a production of the show was a local graduate student, Rini Tarafder. She recently moved to Madison from India this past August.

“As someone very new to this community, I thought it was a great first exposure to how gender and counterculture were represented on stage,” Tarafder said in response to the show. “The play promotes the question: how can the people live together if they’re constantly fighting?”

As a community theater, Krass has the unique ability to consider the broad spectrum of contemporary women’s issues, such as equal pay and gender politics.

Despite being a nonprofit organization, Krass ensures that all of its participants are paid a stipend, acknowledging that women deserve to be recognized for their work.

The Mineola Twins production also demonstrates how Krass defies gender norms in its casting process. Two of the characters in the play, Sarah and Jim, were depicted by the same female actor despite being different genders.

“I wanted somebody who could play both a man and a woman. I could have cast [the roles] as a man, a woman or a non-binary individual. I went into it with an open mind,” Johnson said.

As Krass approaches its 10th season this spring, they are in the process of securing a new board of directors. One of the newest board members, Nichole Young Clarke, joined Krass a little over a year ago. She was recently appointed as the co-president of the board.

“There’s this overwhelming feeling that this community wants and needs a company like this,” she said. “Anybody is welcome to join our board meetings and anybody can pitch an idea. You don’t have to worry about being judged, especially if you are a new playwright or director. There are conversations you can have in our group that might not be possible elsewhere.”

Envisioning the ultimate future for women’s theater, Thal stated, “In the long long long run, I hope women's theater won't be necessary because all theater has 50 percent women playwrights and directors.”