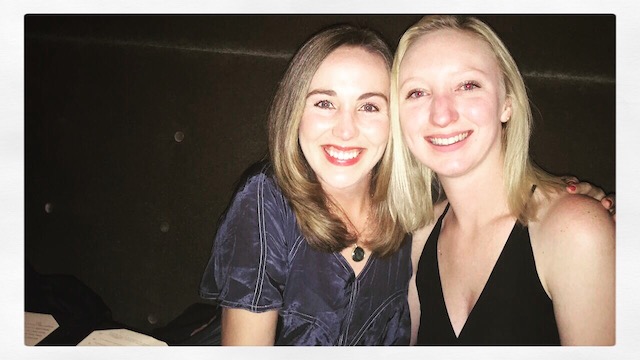 Tanisha Hook went door-to-door, begging for food after her family was routinely kicked out of apartments and living on the streets.

She was 4 years old.

Until her school therapist stepped in and helped Hook enter the foster care system, she was a child experiencing neglect. Going to school with dirty clothes and hair, black eyes and cold sores, Hook would take on the role of the parent and try to make things work.

For children like Hook, these experiences can become routine and a new normal. This is where CASAs can make all the difference.

CASA, or Court Appointed Special Advocates, is a national nonprofit organization that provides court-appointed, trained volunteers to be a child’s steady presence and healthy role model in what can be the most difficult time in their lives.

“I have felt the importance of this program every single week that I meet with my kids,” CASA volunteer Lizzy Schatz said. “When I started [volunteering] I thought it was really important for children to have advocates in this system because at the end of the day CASAs are often times the only people in a child’s legal party that sees them on a consistent basis…I think that it’s so important for kids to be more than a number when they’re going through the juvenile system.”

Children actively in the court system and going through Child Protective Services (CPS) have the opportunity for their judge to assign them a CASA volunteer who meets with the child once a week for an hour each visit.

In 2016, 681 juveniles aged 10-17 were referred to the Dane County Juvenile Court Program. Only 4 percent, or approximately 33 of these juveniles, were placed in foster homes.

Of the 33 juveniles in foster homes, Dane County CASA served 24 of them, accounting for 25 percent of the children they served in 2016.

“I think we know that we’re somewhat limited in our resources, we wish we had more foster parents, we wish that we had homes that were capable of taking sibling groups all together so that we don’t have to divide siblings… I think what we’re seeing right now is that we certainly need foster parents as much as we ever have,” Dane County CASA Program Director Meaghan Henry said.

The process of being assigned a CASA begins with a mandated reporter. School social workers like Mya Johnson from Jefferson Middle School in Madison report signs of neglect and abuse to Human Services, starting the potential court process.

“If you’re a mandated reporter, then your job is to to call that into Human Services. They have a whole agency that deals with [assessing safety].  So once we make the call then it’s out of our hands,” Johnson said.

Hook’s school therapist submitted a report which ultimately resulted in Hook’s placement in the foster care system and her CASA assignment.

For CASAs or anyone in a position to help families going through the court system, Johnson believes that allowing the families to be a part of the decision process is meaningful.

“It’s not deep, it’s not something that you have to have a master’s degree, it’s common sense. You’re dealing with other people’s lives so of course they need to be a part of the conversation, Johnson said.”

Dane County CASA volunteers like Schatz work to learn about the entirety of the child’s life, going beyond the weekly, hour-long interactions.

“Part of the CASA’s role is to walk with the kid through their life. They see them every single week, hopefully checking in with school counselors, teachers, important people in their life if it’s relevant to their case,” Schatz said. “We would hope that the CASA volunteers would be the ones seeing where there is something that can be worked on… and this can help a kid.”

Hook’s CASA planned activities that allowed the two to become acquainted in a setting that made Hook most comfortable.

“We’d always just go to the park and she would take me on my family visits to see my birth parents,” Hook said. “I don’t remember a lot about it because it was pretty traumatic, but she was really great to me—nice and loving and I remember car rides with her to the park and her introducing me to the family that raised me.”

Hook was placed in two separate foster homes until her CASA introduced her to a third and final foster family who adopted her.

“It was something that was really tough for me growing up but I am very compassionate and sympathetic and loving and I am just the way that I am because of what I went through,” Hook said. “I’m happy I went through it, as weird as that sounds.”

Hook, now 23 years old, attributes her success story to those who were there for her as support systems and for guidance through her toughest times.

“I had no clue that they were volunteers and that they weren’t getting paid and that these are just really genuine people wanting to help,” Hook said. “These are really great individuals that take the time to help you find a better life and to cope and manage in ways that are helpful.”

CASA programs rely on volunteers to interact with children and depend on money from county funding, grants through the Department of Justice Victims and Crime Act and donations from organizations like Kappa Alpha Theta.

Members of Kappa Alpha Theta learn about and advocate for Dane County CASA through fundraisers and volunteer opportunities planned by the chapter’s philanthropy director.

In learning more about CASA through Kappa Alpha Theta, Laura Bolles, a 2017 UW-Madison and Theta alumna who is now located in California, was interested in becoming more involved.

“I had never heard of CASA before Theta, actually… but once I came home and I was looking for a volunteer thing, a big deal of it was talking to my friend,” Bolles said. “She said to me ‘I think you’d make a great CASA and I think with your experience and your personality I think you could really make a difference in [a child’s] life.’”

This friend is Tanisha Hook.

“I told my friend Laura… about it and now she’s doing it and it just makes me feel really good to know that I’m impacting someone by going through what I went through,” Hook said.

“Although one’s in Dane County and this one’s over here in California they are all connected, they’re independent but they’re all working towards the same general cause and helping children,” Bolles said.

In Dane County, CASA served 96 children with 125 volunteers who served upwards of 2,500 hours collectively in 2016. In 2017 Dane County CASA has served 101 children and is on track for growth.

“We’ve been really focusing with Wisconsin CASA on getting more CASA programs in more counties so that kids in every county can be served by the CASA program,” Henry said.

Serving more families allows CASA volunteers to impact more children in Dane County, but with growth comes the struggle to accommodate for the increasing need.

“Ideally it’d be in every county,” Schatz said. “I’ve heard a lot of people in this field say ‘I hope to one day be out of a job’ and I think that’s really true. I hope to one day not need to have people whose job or volunteer role is to advocate for kids because they wouldn’t need it but there is and that’s really needed in Dane County, unfortunately.”