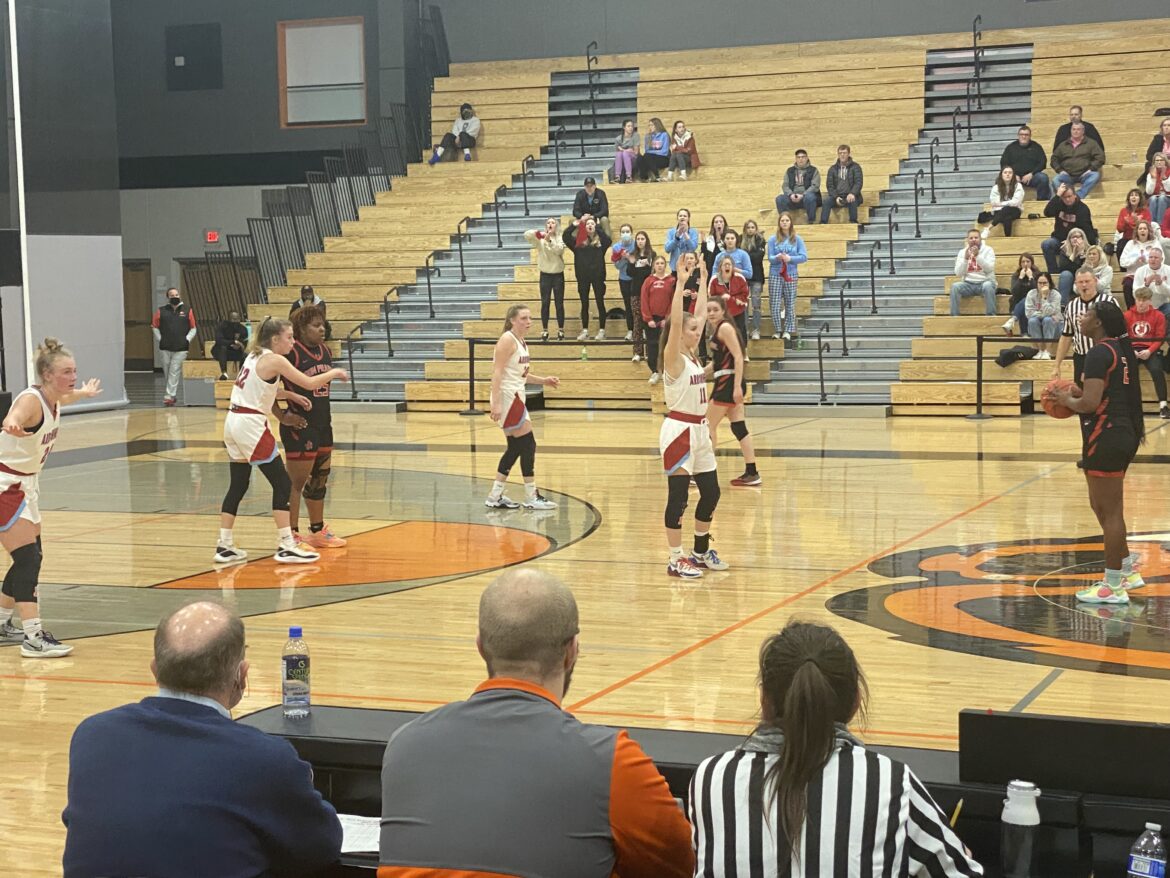 VERONA, Wis. – Sophomore Taylor Thimmesch shot the lights out against Sun Prairie to lead Arrowhead to a 59-41 victory.

No. 3 Sun Prairie girls’ basketball met No. 2 Arrowhead Thursday night at Verona Area High School in the sectional semifinals. The two teams matched up in the same round last year, where Arrowhead won 54-35. Both teams returned four players each who scored in last year’s game.

The first half was close with both teams sticking to their defensive identities. Arrowhead deployed a variety of zone defenses while pinching the middle to slow down junior Antionique Auston, while Sun Prairie applied constant pressure on the ball and help side defenders to create turnovers and push the ball.

Arrowhead finished the first half on a 9-0 run over the last three minutes. The run was capped off when Arrowhead stole the ball with eight seconds left and missed a shot launched from just past half court. Junior Sarah Larson rebounded and shoveled the ball to junior Bella Samz for a buzzer-beating layup to end the half, 23-18.

“We had some layups in the first half. Our defense gave us some opportunities,” Sun Prairie coach John Olson said. “If we make three or four of those layups then we’re ahead and that would be a big psychological win for us.”

Throughout the half, only three players from Sun Prairie scored: Auston netting nine of the 18.

Sun Prairie was able to hold Arrowhead’s leading scorer, Alaina Harper to only two points in the first half, with those coming from the free throw line.

“Going into it I knew she was bigger than me and it was going to be a battle,” junior Makiah Hawk said. “The game plan defending her was to just stay in front of her and making sure she was not getting the ball. I feel like we did a pretty good job just keeping them out of the lane.”

This defensive focus in the paint opened up the 3-point line for Arrowhead who hit five threes in the first half.

“When they knock down threes like that then that opens up the post,” Olson said. “So, when you have an inside outside game that’s pretty tough. “

The second half was a different story with the two teams scoring in a variety of ways. Arrowhead got large contributions from Thimmesch and Harper. Thimmesch had three three-pointers to push her to five on the game. As Hawk dealt with foul trouble in the second half, Harper took off with 14 points and shot a perfect 8-8 at the free throw line in the second half.

Sun Prairie’s lack of depth at the guard position was what ultimately allowed Arrowhead to overpower them in the second half. Sun Prairie was once again led by Auston, who scored 12 of her 20 points. Despite getting little rest throughout the game, senior Rachel Rademacher was able to score 10 points in the second half for Sun Prairie.

Rademacher plans to attend St. Norbert College next year, double majoring in business administration and communications, and is considering playing for the Green Knights.

This is the last year that all of the girls will play for the same school, as a majority of them will attendSun Prairie West next year.

“We were just molded together, we all were together,” Rademacher said. “For the two staying here and the five going to West, I want them to still talk and be one. We were one and that’s what I want them to carry over to East and West.”

Arrowhead will play on Saturday in the sectional finals against No. 1 Brookfield East at Sun Prairie High School.