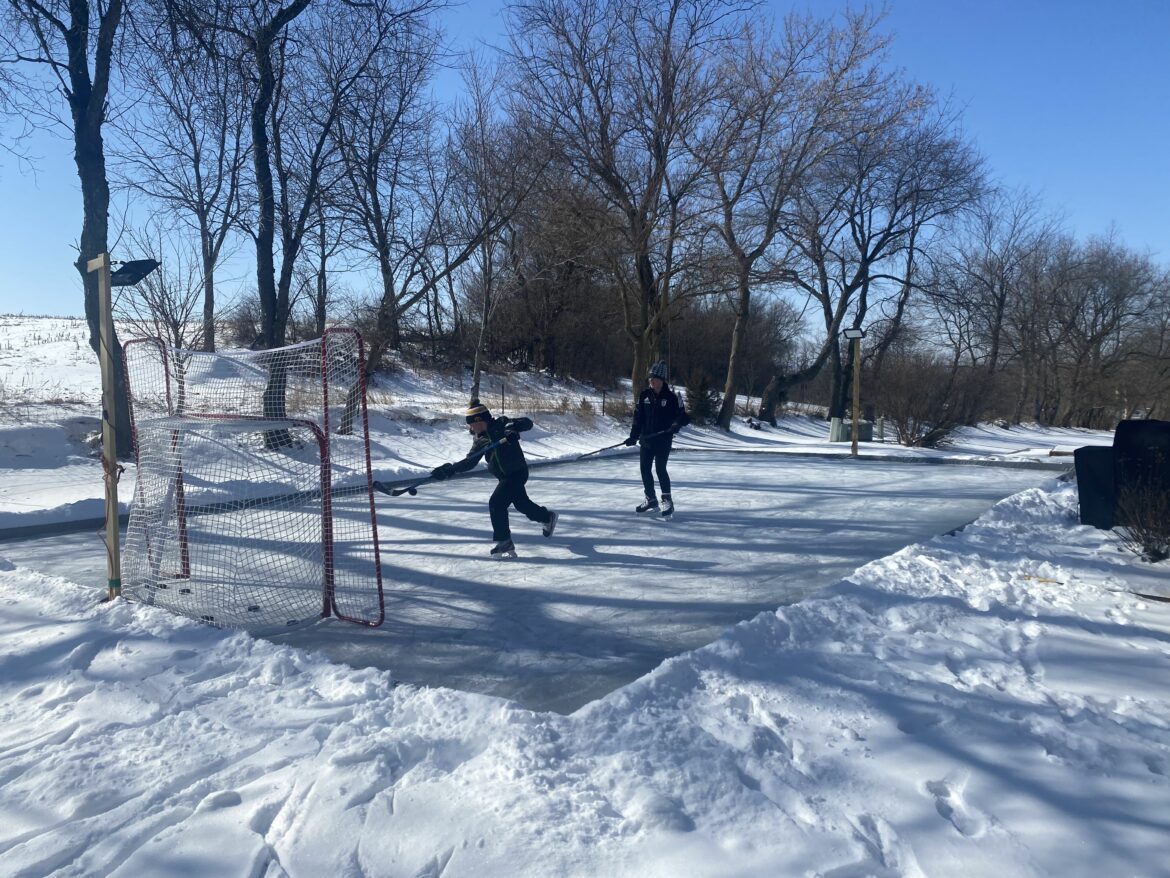 It is no secret that Wisconsin winters can be brutal. From the blizzard of March 2011 to the January 2019 polar vortex, there are brutal weather events that keep Dane County residents inside. But the rest of the season can often be a winter wonderland to enjoy, and some families go so far as to create their own by building a backyard ice rink.

The effort requires a few simple supplies: wood, a thick plastic liner, screws, a power drill, brackets, tools to help measure and level and, finally, water. It is important that the plastic liner is clear or white, because a black liner will absorb sunlight and melt the ice. Alternatively, companies sell premade plastic pieces designed to withstand the elements that can be used instead of wood for those who don’t feel as skilled with home projects.

The biggest key is making sure that the rink is level, which means yards with large slopes will require a significant amount of effort. Once the rink is assembled, it takes around eight hours to fill and several days to freeze.

Bryan Ellefson, 42, of Waunakee set up a backyard ice rink for the first time this past November. Ellefson used two-by-twelves and a 10mm thick black tarp to construct his rink, due to how heavily his yard sloped from one side to the other.

“I would like to start a little earlier next year so that it is not such a rush on the design side,” Ellefson said.

There are also options to customize backyard rinks,  such as putting colored PVC pipes or lights under the water to create rink markings, such as a center line.

Ellefson has two children, Hayden, 12, and Jake, 10, who use the rink at every opportunity during the current winter season. Jake plays travel hockey, with his main position being goalie. This played a big part in what motivated them to build the rink in the first place.

“One of the biggest challenges in hockey is ice time, so it scratches an itch,” Ellefson said. “It also keeps our kids off the screens in the winter and gives them something to do in a winter that didn’t have much snow.”

The Ellefsons’ rink this year was 25 feet by 45 feet, and as deep as 10 inches in one spot due to a slope in their yard. It was initially designed this way to allow Jake to practice playing as the goalie. Ellefson hopes to make a white backdrop so Jake can see the puck at night, add in a rubber runway from the door to the rink and expand the width a little bit.

The rink has also attracted some of the attention of kids in the neighborhood who come over to skate with Ellefson’s children.

While Jake does play competitively for a travel team, Hayden had never gotten into hockey or organized hockey before this year. The rink has provided the opportunity both for Jake to teach Hayden about the sport, as well as providing an activity that they can do together during the colder months.

“I like teaching my friends and Hayden how to play and watching them grow,” Jake said. “It has definitely made us closer.”

Prior to this year, the only way to get consistent ice time outside of practice was by going to a nearby pond.

“It was a bit of a hassle to go skate down there,” Ellefson said. “It’s the process of ‘does everybody have their skates? Does everyone have a water?’ then you get there and someone needs to go to the bathroom.”

There is some necessary maintenance to resurface the ice to keep it level. Depending on how often the rink gets used, it needs to be resurfaced at least once a week. This is done by scraping off any excess ice shavings and debris that may have become frozen to the ice, as well as topping it off with a new layer of water. It is also extremely important to make sure snow is removed from the ice so that it does not freeze to the surface of the rink and have to be scraped off.

The backyard ice rink season typically ends sometime in March. To sustain the rink, the temperature must drop below 20 degrees Fahrenheit for multiple nights in a row. According to usclimatedata.com,  the only months to average lows of 17 degrees or lower are December, January, February and March, meaning that the backyard rink season lasts between three to five months depending on what kind of winter Wisconsin provides in a given year.

The Ellefsons considered this year a huge success due to the amount of use and enjoyment they got out of the rink.

“They use it every day,” Ellefson’s wife, Janice Ellefson, said. “In the beginning we would have to cut them off from using it before school because we were getting late to school. They are just on it all the time.”

There are currently a few great resources and communities about building and maintaining backyard ice rinks. One that stands out in particular is the Facebook group Backyard Ice hockey Rinks, she said.

“It’s fascinating. I’m amazed that people from the most northern part of Canada are talking to people from central America,” she said. “It’s very positive. It’s the smallest rinks to the most ridiculous rinks in an indoor barn that looks like you should host tournaments.”