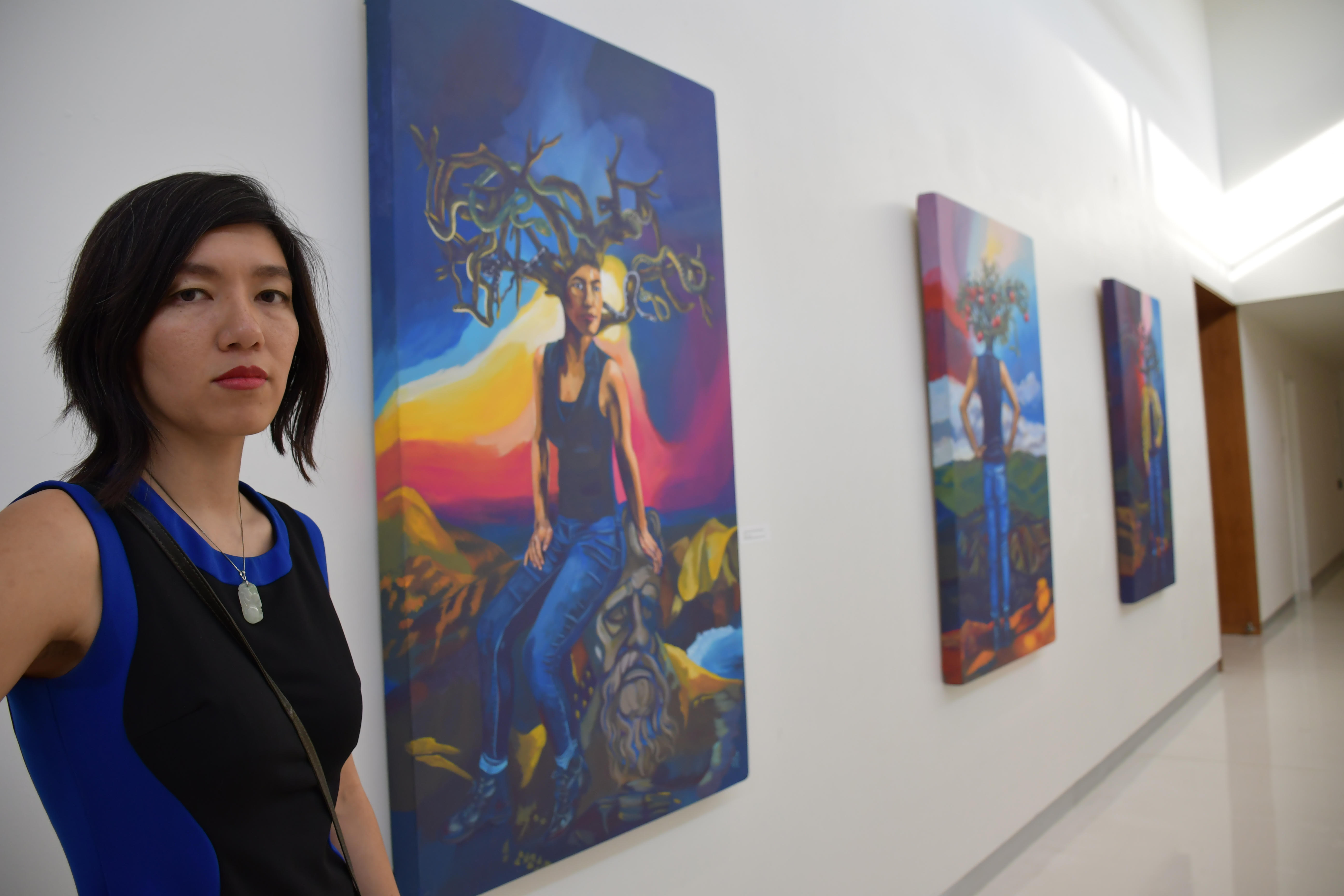 Gao, however, sees it differently.

“From personal to professional to political spaces, I have paid attention to disputes between people who plead for common ground yet gloss over perspectives and leave issues unresolved. I have wondered that if instead of common ground, we should advocate and claim space for identities and representations that are rare,” Gao said.

Her installation, Uncommon Ground, is the sole exhibition in the Diane Ballweg Gallery at the Madison Central Library. It focuses on who and what don’t take up enough space and the “urgency with which we need to protect the things that are increasingly rare and likely to disappear,” Gao said.

The exhibition is on view until Sept. 27 and showcases more than 10 works available for purchase ranging from paintings to relief prints to inks on paper.

Specifically, Gao said, women of color take up little space in the arts world. Stating that although women of color cumulatively represent 18 percent of the population, they make up less than half of one percent of US museum collections and art representations.

“This is one of the most dramatic examples of misrepresentation of our population. People often undermine the arts by treating it as superfluous and unnecessary to society,” Gao wrote to Madison365. “Some people even think it's okay for only the wealthy and privileged to have access to the arts, since it isn't deemed a ‘necessity.’ But the arts are about what we as a society deem to be culturally relevant. So it matters that the demographics of our artists and arts organizations do not represent the demographics of our country. It says that one group's voice, particularly white men, are more culturally relevant to American values than all other groups combined. Anyone who is not a white man, and especially women and trans people of color, represent the Uncommon Ground of the art world that we must fight to claim space for.”

In the exhibition, she has a trilogy piece titled the Feminist Allegories. The goal of these paintings is to “undo the wrong done by the way these stories have been told,” she uses new symbols to change the interpretation of old symbols and paradigms.

Each painting represents a known myth:

Medusa, Eve from the Garden of Eden and Longmu, a Chinese myth about the mother of dragons. She described the second piece in the trilogy for Madison365.

“The question I asked when creating each of the Feminist Allegories was, ‘What would liberation look like for each of these women? What would help rectify their stories?’” she wrote. “For example, the well-known story of Eve is that she fell to the devil's temptation and bit the apple against God's command, and as a result she and Adam were cast out of the Garden of Eden. Eve, and all women, have since carried the blame for this event. The apple represents knowledge, so this story is an illustration of a woman getting punished for pursuing knowledge. Therefore, the painting in my series entitled Eve's Quest for Knowledge depicts Eve claiming knowledge and walking away from the viewer (or the garden) by her own volition, taking knowledge with her.”

Gao also explained the presence of her past in her paintings. She is the daughter of Chinese and Taiwanese immigrants. In the third piece with Longmu, there are homing pigeons perching on the shoulders of her recurring tree-headed person, who is a symbol of Gao’s childhood, “playing in the woods, which were foundational to my relationship to my dad,” and a symbol of her mixed heritage background “as the daughter of immigrants on American soil, growing and changing constantly and even imperceptibly, shaped immensely by history but distant from my roots.”

More information about the exhibition and the artist is available at jenie.org.