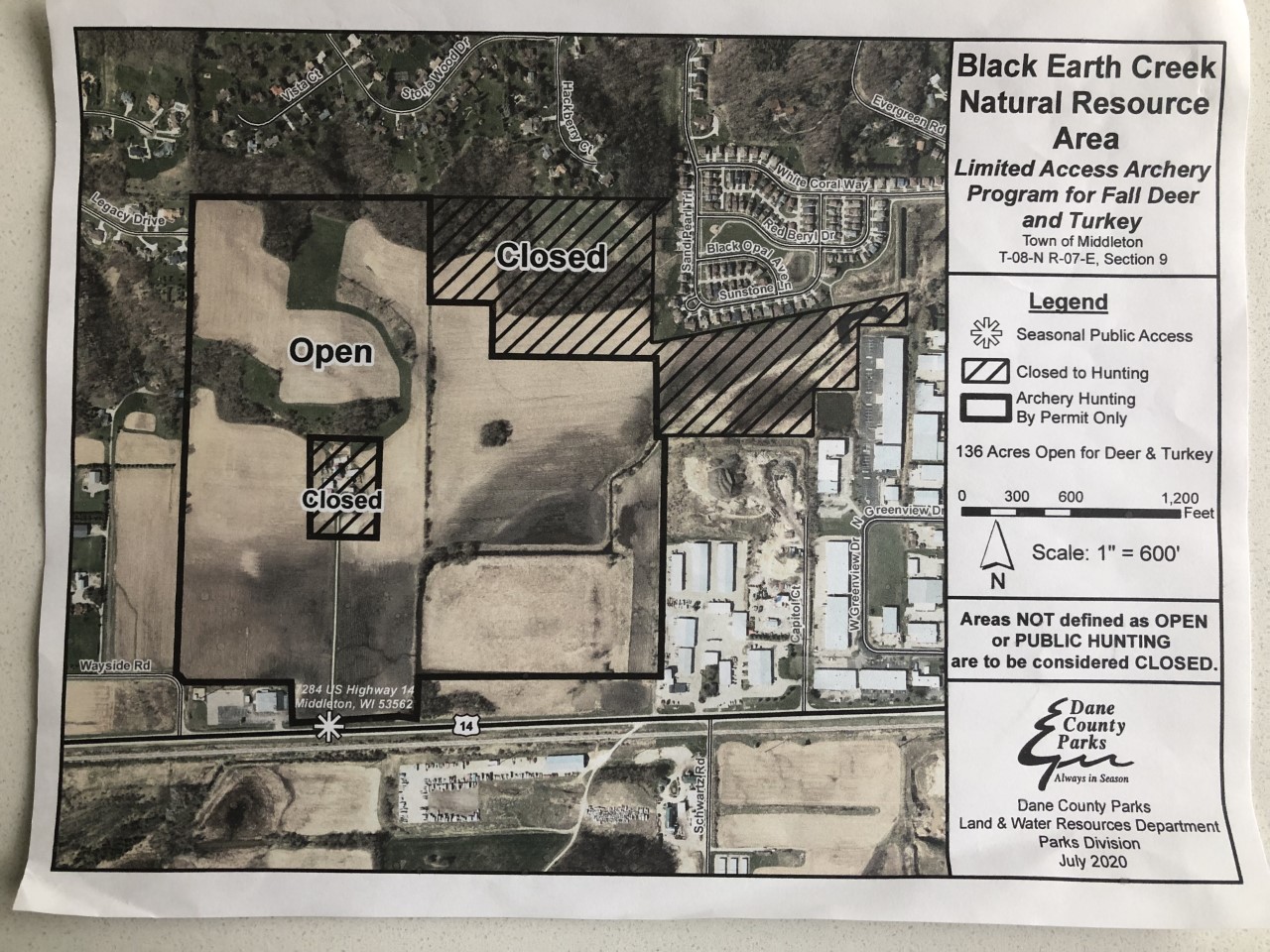 Over the past year, residents of the Prairie Home Estates and surrounding neighborhoods have worked with Dane County Parks to develop a plan to allow bow hunting in the Black Earth Creek Headwaters Natural Resource Area and help control chronic wasting disease.

Dane County Parks opened Black Earth Creek to hunting turkey and deer during the regular archery hunting season, which goes from the middle of September to early January. Only hunters who follow the Department of Natural Resources’ safe hunting regulations and have permits from the Dane County Parks permit lottery are allowed to hunt in the park. As of now, the city has only handed out two permits for this land.

The planning process started in summer 2020, when the city added Black Earth Creek to its limited archery access permit program to help move deer and control Chronic Wasting Disease, also known as CWD. The neurological disease in deer is both fatal and contagious.

“We developed this limited archery access permit program to basically assist with controlling CWD within some of the urban environments,” said Dane County Parks Facility Planner Alex DeSmidt. “When we bring properties into our system, we look at their opportunities for this program, especially when they are in an urban environment and along highway corridors like this one where a large concentration of deer might begin to populate and spread CWD.”

The current map did not always look the way it currently does. An initial map the county sent to residents would have allowed anyone with a park hunting permit to hunt within 100 feet of Legacy Drive, only 110 feet from the two nearest houses. Residents were concerned about safety given the close proximity.

“We were scared because there’s tons of children in these neighborhoods,” said Andy Zich, whose home is near the park on the northside of Legacy Drive. “A stray arrow could be catastrophic.”

Many of the families in the neighborhood have children who are active outside. Zich has two middle schoolers who often play in the backyard. Across the street, the Heckmann family has four kids ranging in age from high school to college who spend a lot of time in their pool or working out in the backyard. These areas have direct access to the field with only a thin wire fence separating their yards from the park.

Zich said deer often come down from the woods near his home to walk along the fence and Amy Heckmann says dozens of turkeys walk through her yard on an average day. Both fear that hunters would be tempted to shoot at animals that are on the public land but still within the 100 feet of the residential area, which is within the effective range of most hunters, according to Bow Hunters United.

The residents of Legacy Drive contacted Dane County Parks to address their concerns about the proposed map. In September 2020, then-parks Director Darren Marsh  met with families both from Legacy Drive as well from adjacent neighborhoods.

chair and they went out to answer questions and solicited input from them,” said Chris James, senior landscape architect with Dane County Parks. “I think that was a pretty big step on our part. We normally don’t do that but in an area that is a little bit more urban like this, we will go to some extra steps to answer questions if people have questions, comments or concerns about it.”

The meeting resulted in the county officials adding buffer zones in the park where hunting was not permitted.

The new map added roughly 700 extra feet between the hunting grounds and the nearest residence. Neighborhood residents saw their efforts as a demonstration of the power people have when they come together in an organized fashion.

“This is a good example of neighbors coming together to unite against an issue,” Heckmann said. “Once we pushed back, they listened, which was gratifying to see. Overall, it left me with a good impression of Mr. Marsh, the Dane County Parks system and my neighbors.”

The compromise does not completely resolve feelings of uncertainty for some residents, including whether the program would ever allow gun hunting in the park.

“Once you set the norm for something, it becomes easier to expand it,” Heckmann said.

Dane County has yet to have any significant issues with any hunters, but  there is always some baseline level of risk for an accident. There is some comfort that if there was a problem, the parks system reserves the right to take away hunting permits, as well as refuse to issue them in the future.

Dane County Parks’ willingness to meet with residents is what allowed the plan to come together. While this is the first park with the Limited Access Archery program in an urban area, this was a good learning experience that county officials can replicate in other places.

“This story does have a happy ending,” Zich said. “You’d hope there will be more foresight in the future for dropping hunting land in urban areas.”