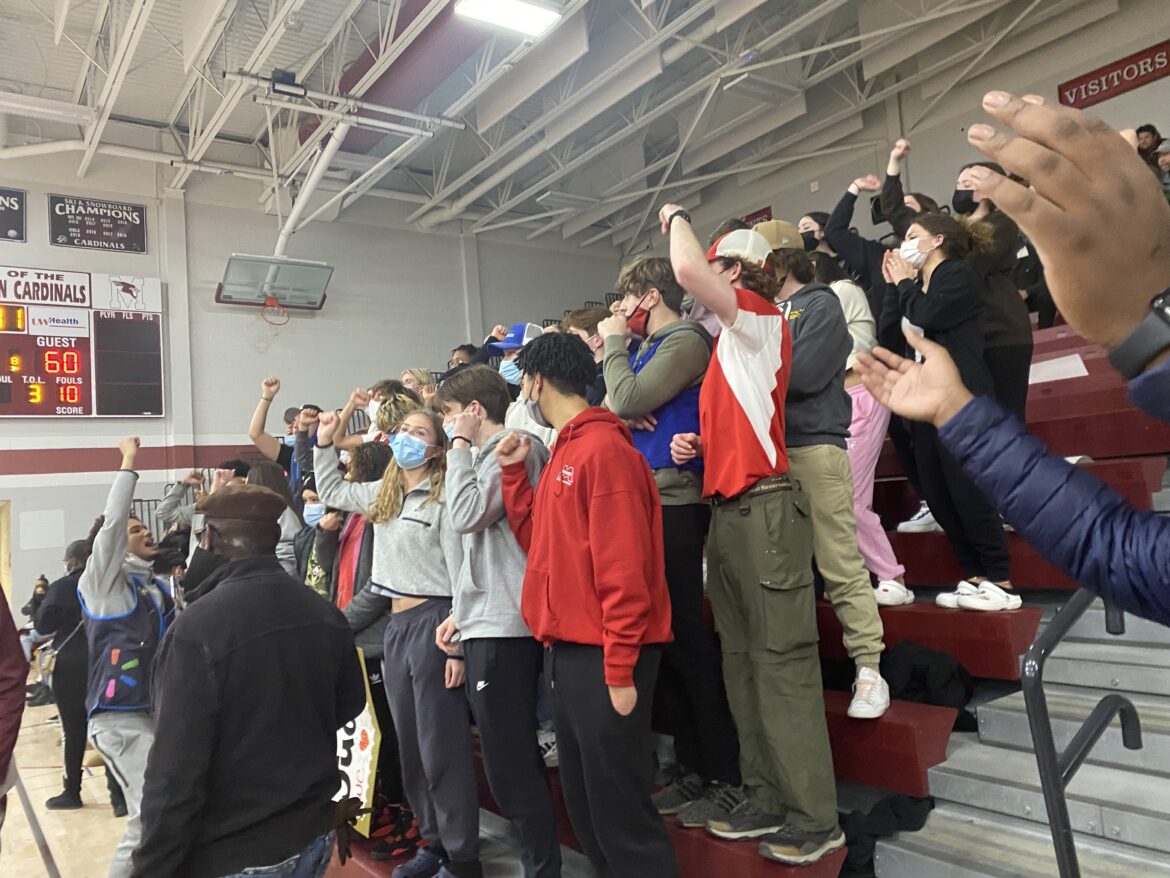 During the pre-game senior ceremony at the Middleton vs. Madison La Follette boys’ basketball game on Thursday, Middleton senior manager Patrick Park was able to challenge his fellow senior Easton Zemple to a friendly game of one-on-one. After a few attempts, Park was able to drain a layup. Middleton’s team immediately rushed to raise him on their shoulders as fans from both teams roared. This was the last time that night that both sides would take such a friendly stance.

After losing to the Cardinals by seven in mid-January, Big Eight Conference Champions La Follette got revenge on Middleton’s home floor with a 72-45 win just 24 hours after beating Verona on their home floor.

The final score was not indicative of the majority of the game. It was close the entire first half, with Middleton dominating the pace of play by slowing down the ball, limiting possessions and fast break opportunities. There was a slight turning point after La Follette senior Camron Yahnke came up with a steal, got bumped on the offensive end and assisted a layup.

This bump ended up giving Yahnke a bloody nose, which gave both student sections the opportunity to get into a shouting match while they cleaned up the blood. While Middleton’s student section  chanted the “Mighty-Mighty-Cardinals,”  La Follette’s students roared back “We can’t hear you” and “Why so quiet?” It got to the point where it sounded like a neutral court game rather than a home game for Middleton.

This extra momentum helped the Lancers build a nine-point lead going into halftime. However, it did not take long for Middleton’s 1-3-1 zone defense to squash that lead at the start of the second half.

“That’s what they did the last time they played us,” said La Follette coach Curtel Robinson. “They have nice length and it helped them get back in the game a bit. It took a little while but once we started moving the ball and attacking it opened up a little bit.”

The Lancers struggled to begin the second half as they have many times this year, but some timely offense and hustle plays by Yahnke alongside support from their fans helped push them through the drought.

“I feel like they lift us up a lot,” Yahnke said. “If we are ever getting a slow spurt and we get our fans cheering, it just gives us inspiration to just play harder.”

Yahnke was not alone in the second half scoring effort; major contributions came from junior Arhman Lewis and senior Marii Larrue. After not scoring a single point in the first half, Larrue got 10 points in the second, as did Lewis and Middleton’s Gavyn Hurley.

“Defense always fuels offense,” Larrue said. “If my shots aren’t falling then I just go back to playing hard defense and when I start playing defense, shots start to clear up.”

La Follette pushed away with just under seven minutes left in the game due to sound ball security from Lewis, resulting in a handful of fouls for bonus free throws. Lewis knocked down all six free throws he took in the second half.

“I’ve been pretty bad from the free throw line this season, so I knew I had to just focus and lock in on these last few shots,” Lewis said. “The pressure was on me and I love the pressure.

Middleton was short handed for this game as their second leading scorer, senior Logan Raffel, was sidelined after having his appendix removed. This left the bulk of the offensive load to junior Gavyn Hurley, who finished the game with 19 points. The Cardinals are hopeful to get Raffel back in the playoffs according to head coach Kevin Bavery.

“When you have a player like [Raffel] out who can create his own shot, that rotates every defender up on someone,” said Bavery. “It is a domino effect when you lose one of your better players.”

La Follette will be a No. 2 seed in the WIAA State Tournament. They will host the winner of No. 15 Watertown and No. 18 Milwaukee Pulaski on February 4. Middleton will be the No. 5 seed in the same section of the bracket and will also host a game on February 4 against No. 12 Wauwatosa East.

“This is preparing us for next week,” Robinson said. “Playing a good team breeds confidence going into the playoffs. I’m happy that we are playing basketball right now and that we have the opportunity to play in a playoff.” said Robinson.