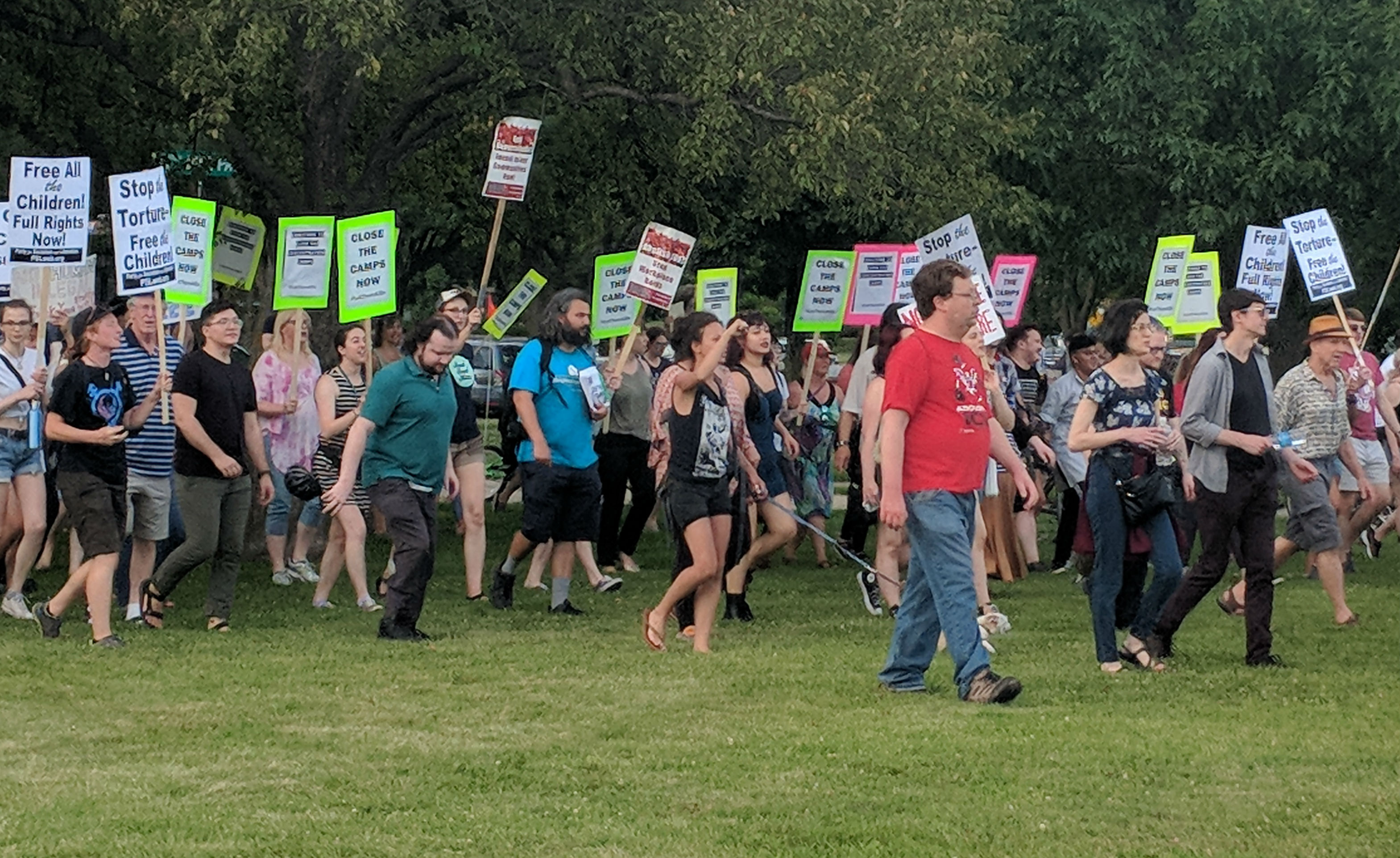 Several hundred people gathered at Brittingham Park in Madison across two events on Friday evening to speak out against the detention of children and families at the U.S.-Mexico border.

A rally hosted by the Close the Concentration Camps Coalition met earlier in the evening at a former Immigration and Customs Enforcement (ICE) office, and marched about a mile to the park for a candlelight vigil held in conjunction with Lights for Liberty.

Both events hosted speakers who spoke to attendees about conditions at the border. Organizers hosted a “speak out” at 222 W Washington Ave, a location known to have served in the past as an ICE field agent office, featuring a number of undocumented and immigrant speakers. Speakers for the Lights for Liberty event included Rabbi Andrea Steinberger of UW-Madison Hill-El, Reverend Everett Mitchell of Christ the Solid Rock Baptist Church, and immigration attorney Shabnam Lofti, among others.

The vigil also featured a number of speakers, who read testimony from children detained at the border, and a candle lighting ceremony.

Though the two events converged at the park, each attempted to speak to slightly different political contingents. The Lights for Liberty event, organized by Indivisible Madison, primarily aimed to give people an outlet for grief and outrage.

"This is going to be more about empathy than resistance," Linda Kessel of Indivisible Madison told the Cap Times last week.

Susan Price drove in for the vigil from Richland Center, about 65 miles west of Madison, with a large sign she’d designed from cardboard and tinfoil. “I can’t sleep at night,” she said, explaining why she’d made the drive with her sign.

Kim Gasper is one of the principle organizers behind the march and rally. She and a collaborator in San Diego helped start the Coalition to Close the Concentration Camps as a way to offer more political tools to folks like Price, who are disturbed by conditions on the border but may not have pre-existing connections to formal political organizations.

“Our goal was to bring more people to the table,” Gasper said in an interview Saturday. “The people who came last night, for the most part, not entirely, aren’t currently in an organization. They’re angry, they’re outraged, but they’re not actually in an organization.”

Throughout the event, organizers collected cash donations for the Dane County Immigration Assistance Fund, the Community Immigration Law Center, and the Coalition to Close the Concentration Camps. Gasper said volunteers raised close to $1,200, which she plans to split among the three groups.

“I’m hoping that we can be supportive locally and financially, and that we can, brick by brick, grow a movement that can work with people who are already doing this work,” Gasper said.

Annie Ho attended the march with an eye to that movement-building work, saying “I’m here because I believe that there should be no borders, no nations, that everyone deserves safety, and to not live in fear.”

Although the vigil didn’t align completely with Ho’s own political commitments, Ho was excited to see the event bring gather people around this issue. “I think it’s the best that Madison can muster right now, and that’s okay. I’m glad there are a lot of people here, and we’ll get to where we need to be at eventually,” Ho said.

Other organizations used to the two events as an opportunity to do movement-building work with youth. Anne Motoviloff, a recent graduate of La Follete High School, and Grace Jensen, a La Follette senior, both attended the event with NextGen Wisconsin’s youth arm.

“One of the organizers who is training us was talking about how this issue is starting to fade a little bit from being in the public eye, and I don’t think that’s acceptable or really an option. You forget about it at the expense of other people’s lives,” Motoviloff said of her involvement.

“It’s a human-rights violation. It’s so inhumane to have people dying on our hands in America, and have them being detained in pretty much concentration camps. It’s just disgusting,” Jensen added.

The Coalition to Close the Concentration Camps group will hold a follow up meeting on July 15 at the downtown public library.