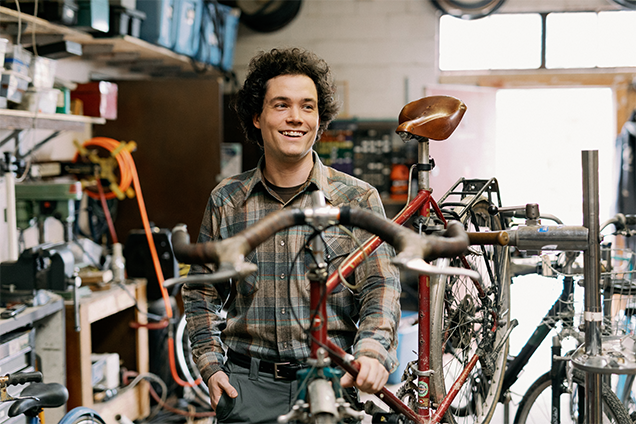 Freewheel, a Madison non-profit which advocates for making bikes accessible for everyone within the community, was distinguished by eBay as one of eight SHINE Awards winners, and is now up for the grand prize -- but needs votes to get there.

The SHINE Awards aim to honor small businesses and non-profit organizations who are using eBay as a partner for fundraising initiatives. Freewheel sells bikes on eBay and invests the revenue in providing free bikes and bike maintenance to those in need here in Madison.

As one of the winners of the SHINE Awards, Freewheel has already received $12,000 and is qualified to compete for eBay’s Grant Prize, which is decided in a public voting process among the eight SHINE Award winners. The business with the most votes will receive $15,000 in cash and a total value of $42,000 including other goods and services.

Voting is open at the eBay website until July 25.

Learn more and view a video about Freewheel here.

“The (initial $12,000) is going to go right back into opening a new location in October,” Freewheel president Elijah McCloskey said.

Winning the Grant Prize would allow Freewheel to provide more bikes and better supports to the local cycling community, McCloskey said. If they win the additional $15,000, Freewheel will be able to scale up in classroom size from 600 people per year to around 1000 and donate as many as 5000 bikes in 2020.

Freewheel partnered with the City of Madison to operate a new bike center as a part of the Judge Doyle Square development plan.

“We will be having an extensive number of educational opportunities, free classes, and services to cyclists at the space, in addition to cycling-community events in that space,” McCloskey said.

This is not the first time the organization has participated in the competition.

“We were actually selected [as one of the winners of SHINE Awards] last year. There were 15 finalists,” McKloskey said, “And this year there are eight winners.”

As a Madison-based organization, running for the final prize not only puts Freewheel in the spotlight, it also honors the cycling community in Madison.

McCloskey is among those who have received help from Freewheel. At the age of sixteen, McCloskey lived homelessly and struggled to get employed due to a lack of reliable transportation until Freewheel offered him a bike.

“I used that [bike] to get a job, and I used that job to get an apartment and eventually go to UW-Madison for business management,” McCloskey said.

In the past 17 years, Freewheel has given away over 13,000 bikes to people in need, along with providing free education for anyone interested in bike maintenance, McCloskey said.

The polling for the Prize Grant starts from July 15th to July 25th. People are able to vote through the eBay website.