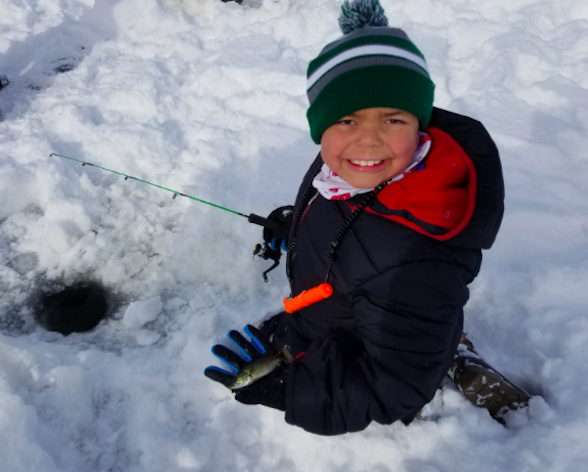 Enjoying the great cold outdoors while ice fishing requires preparation. Prepping to ice fish starts with figuring out a good shelter. Tents that are equipped with a heater, food, music and sleeping bag is the warmest option; however, many folks head out to the lake with just a trusty bucket to use as a seat.

After deciding on whether to use a shelter, it’s important to wear the right clothing. Layers of jackets and sweaters are a must, along with a good pair of winter boots. The wind on the lakes around Madison is unpredictable. It could seem calm on shore, but once on the lake the wind can become testy. Bring a winter hat, gloves, and goggles. Also remember to bring a drill, an ice rod, and a tip-up.

Over the course of several weekends in February, I spent time on the ice on Lake Monona talking to people about ice fishing and its tradition and challenges. I learned that ice fishing is more than catching a fish in frigid temperatures, it’s a character test and a time to bond with friends and family.

On a cold Sunday afternoon, I met Mike Kiffel who had only been on the lake for a few minutes before deciding to check his tip-up to see if anything was biting. Kiffel has been going ice fishing since he was a child with his father, and now he comes with his teenage son, Reilly, and passes the tradition down to the next generation.

“My dad took me, his dad took him, so I kind of followed that. I used to go ice fishing a lot, and he (Reilly) started started five years ago. I brought him out and he’s got the bug,” Kiffel said.

After a look at the tip-up, nothing was biting. He looked at his son, shrugged, and sat back down to talk about life with Reilly and to wait some more.

For 30 years, Gale Zastrow has been ice fishing, and gave her partener, Pat Repovsch the bug when they started their relationship five years ago.

“I’ve always liked winter, and I like being with her (Zastrow). She said we were going to go fishing and I said, yeah, that sounds fun to me,” Repovsch said. “I’ve never came out, and after the first couple of years she goes, yeah but the fish are out there…”

Figuring out where to set-up your shelter or plop down a bucket takes some guess work, a hunch, or previous experience finding fish in a certain area of the lake.

To drill a hole in the ice a lot of people use a hand auger. This tool consists of a drill head with ice cutters to drill into the firn, a core barrel which holds the core intact when pulled to the surface, and a hand crank for the operator to rotate the drill from the surface.

Once the hole is drilled, most people like to drop tip-ups in the water. Tip-ups are mechanical strike indicators that suspend lines under the ice.

“A tip-up’s different than jigging a poll. If a fish hits it up than a pleg goes up. Sometimes you just kinda wait to see something was bumping it and taking it back,” Kiffel said.

Another useful tool to use when ice fishing is a vexilar. A vexilar scans the water and allows you to see where the fish are.

“The bottom is where the black line is, and the red is where the fish are. I got could that one but it’s older and much bigger, mine is better,” Zastrow said.

While the DNR keeps track of health concerns in lakes in Wisconsin, most people I met on the ice seemed more concerned with staying warm and enjoying their time, than with possible health hazards of eating contaminated fish.

“All of them (fish), we eat all the fish we catch. I never had any concerns,” Zastrow said.

Nathan Hutchins and Justin Harkins, friends who have been ice fishing together since high school, and are now passing down the tradition to their own sons, are also not too concerned with possible contamination.

“I’ve been doing it off and on my entire life, my son is seven and he’s been doing it pretty much every year. We’re aware what the DNR says about eating fish in certain places, so we watch that, but it’s not that bad here. We’ve caught worse fish,” Hutchins said.

Volunteers, DNR staff, county staff and others collect water contamination, temperature and dissolved oxygen, as well as other water quality data, on lakes across Wisconsin.

Satellite images are also used by the DNR to retrieve water clarity data for lakes across the state.

According to the DNR, Lake Mendota and Lake Monona exceeded the total phosphorus and chlorophyll threshold in 2017, which puts aquatic life at risk of contamination.

Total Phosphorus, according to the EPA, is an essential nutrient for plants and animals. Increased phosphorus concentration leads to the eutrophication of the aquatic environment, which means that there is too many nutrients in the water. Impacts of eutrophication include oxygen deficiency that have deadly consequences to fish and other aquatic life.

According to the EPA, Chlorophyll A is the predominant type of chlorophyll found in green plants and algae. Some algae can produce toxins that can be a public health concern when they are found in high concentrations.

High amounts of phosphorus and chlorophyll can result in contaminated lakes, and kill fish and other aquatic life and can absorb into their bodies. The best way to protect yourself is to use common sense when ice fishing.

Jason Mielke started ice fishing in grade school, and he says there are circumstances were he would have health concerns about the fish, but he’s not worried about it right now.

“If there was a special circumstance, like pregnancy, or something like that I would I might be more concerned. But otherwise I’m not to concerned with me or my wife at this time, because we don’t have any special conditions,” Mielke said.

An individual can search DNR’s WATERS database for previous and current impaired waters listings, as well as listing update proposals.

Even with these concerns, it doesn’t deter people from spending a Sunday on the ice. Lake Monona remains covered in tents or people sitting on buckets. Some folks have been doing this for 30 years, while others are spending their first day on the lake. But what they all have in common is the joy of the hunt that comes with experiencing the outdoors with family and friends. Keep warm, and fish on.