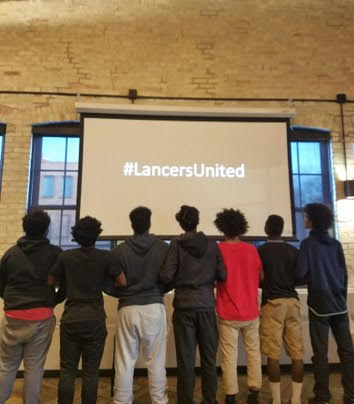 A supportive space for young men seldom exists in high school, but there is now one where boys can ask questions, wrestle with issues and tackle emotional issues.

This space is called MENS Club, and its goal is to revamp the way young men are raised so
they don’t accept toxic masculinity and instead embrace what it means to grow up male in
modern-day America.

MENS, which stands for Men Encouraging Nonviolent Strength, was founded to teach young
men how to push back against toxic masculinity they may see around them and learn how to
cope with emotions in a safe way.

“[Young men are] allowed to digest what’s happening around them in a space that’s supportive and nonjudgmental,” said Zoë Heitzinger, Prevention Outreach Coordinator at Domestic Abuse Intervention Services in Madison.

MENS Club was funded by the Centers for Disease Control and Prevention through
their program called Domestic Violence Prevention Enhancement and Leadership through
Alliances.

“This is a primary prevention program, which means it tries to create an environment where
violence is not going to occur,” Heitzinger said.

Many school programs targeting intimate partner violence use the intervention method, which
addresses issues of violence once they’ve occurred. The primary prevention model used in MENS Club instead aims to create lower rates of both victimization and perpetration.

In short, it tries to squash violence before it begins.

The program starts with identity formation—what it means to be male and what masculinity can
look like. It touches on media analysis, bystander intervention, teen dating and violence.

“The overarching goal of the program is to build young men up as leaders in their school
communities, and as allies and change agents to end gender-based violence,” Heitzinger said.

Last school year, one MENS Club member talked with Heitzinger about pronouns and how to
respectfully address his transgender classmates. The space is free of judgment, so students can
feel free to ask questions about issues that might be unclear to them, without the threat of being
“canceled.”

Throughout the school year, MENS Club works on a project that members present at the end of the
year. The project topic is decided based on what the students of the group feel is most important
to share. Last year, the MENS Club at La Follette High School’s final project was to facilitate conversations
with female students through agree and disagree scenarios, to understand where male and female
students differed in their perspectives on gender.

The evidence was clear—MENS Club works.

Ninety percent of the students involved in MENS Club reported having positive attitude and behavioral
changes regarding their previous notions on gender-based violence, as a direct result of the program.

The group is now established in multiple schools in Madison, creating excitement and
anticipation for students.

“We partner with young men so they can understand healthy relationships,” said Karen Larson, a
program manager at Domestic Abuse Intervention Services.

The two chief concerns with the program are lack of male volunteers and funding.

“I’d love more money, more funding,” Heitzinger said. Buzz around the group has gotten schools
interested in implementing the program at their school, but Heitzinger is the only person in her
department.

“We’re always trying to recruit volunteers, especially men, because we know how important it is
for kids to have healthy male role models,” Larson said.

MENS Club recently received a grant from 100 Men of Dane County, a nonprofit organization
dedicated to lifting up community organizations like DAIS.

“DAIS was a winner [of our grant] pretty early on in our organization's history,” said Charlie
Wills, the board president for 100 Men of Dane County.

The initial donation to Domestic Abuse Intervention Services was specifically for children from abusive households. Because of the success that came from their first donation, 100 Men of Dane County gave the organization a grant to further the goal of MENS Club.

Often, males in American society are taught to value aggression and domination. Boys are hyper
aware of their masculinity and not being seen as traditionally feminine. Sometimes, this mindset can create environments where boys feel they must express their emotions through violence.

This issue starts young, but so does MENS Club.

The program is currently hosted at five schools in Dane County, serving around 75 students
between the ages of 12 to 18.

“The group is voluntary, so the boys don’t have to be there if they don’t want to... But the boys
come,” Heitzinger said.