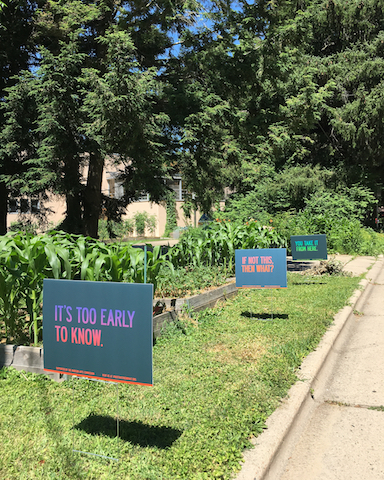 Yard signs with messages about community and belonging have popped-up around Madison as part of a Madison Arts Commission temporary project.

The project, called “If Not This, Then What?,” was created by Madison artists J.L. Conrad and Trent Miller. Sponsored by a Madison Arts Commission grant, Conrad and Miller, who are married, have given out over 200 signs for free so far since the project debuted in July.

The signs contain three different phrases, including “It’s too early to know,” “You take it from here” and “If not this, then what?”

According to Miller, he and Conrad were inspired by the idea of getting people to see and think about how we anchor meaning in the world.

“[Conrad and I] started talking about what would it look like if there were more poetic, open-ended signs in the world as opposed to ones that are so prescriptive, or political, or trying to sell something,” Miller said.

Miller said he and Conrad chose the three phrases because they were the most open-ended and thought-provoking.

“The phrases all seemed to really resonate, to have an open-ended story that people can interpret in different ways,” Miller said. “Depending on where people are in their life situation or what’s happening to them on a particular day, they may see or interpret them differently.”

Miller said that they executed the project through yard signs because of their personal nature.

“Yard signs are very personal to people, because you’re making a definite statement if you’re putting one in your yard,” Miller said. “We liked that we were going to interact with the general public this way. It’s such a different experience to do that than putting something in a gallery.”

The artists hosted three different pick-up events for people to get signs in July and have also shipped signs across the country.

Though Miller said it’s up to individuals to determine what the signs mean to them, he said the lead sign, “If not this, then what?” best portrays the point of the project.

“I think ‘If not this, then what?” is kind of the bigger point,” Miller said. “Thinking about the future, and thinking about what we could do and what is possible.”

According to Miller, the project is just the first in a series of art projects that he and Conrad are working on.

“We really love the yard sign thing and want to continue that in different routes,” Miller said. “So, we’ve thought about curating an exhibition, doing a print publication, or doing billboards.”

In addition to scaling their project up, Miller also said he and Conrad were working on developing new phrases as well.

Whether it’s via a yard sign, in a newspaper, or on a billboard, expect to see more signs on community and belonging around Madison soon.