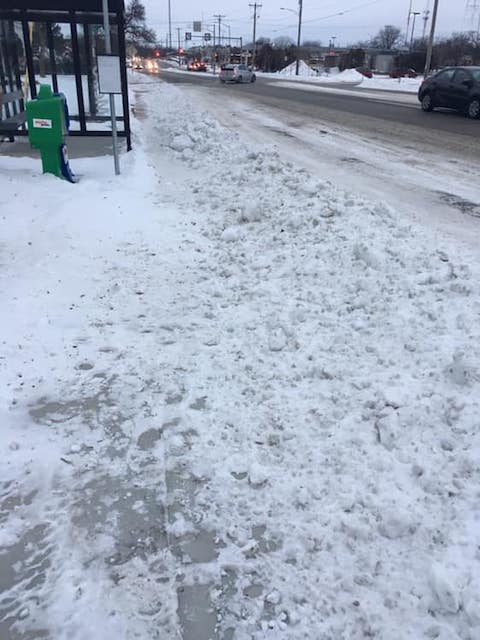 Using Madison Metro bus lines in the winter can be challenging. Days are short; dark comes early; it is cold, icy and slippery.

But using the bus can offer some advantages over driving in winter: there’s no need to de-ice a car, or risk damage and injury trying to drive on a slick, corrosive, or rough road.

Riding the bus in winter eliminates the worry that your car might not start, get stuck in a snowbank, or worst of all, that you may run afoul of those infamous 'alternate side parking’ rules. And of course, for many riders, using the bus in winter isn’t merely a convenient choice—many riders rely on the bus as their primary means of transportation year-round, or use the bus as a backup to traveling by foot or on bike as the weather gets cold.

Buses are also one of the more versatile options for mass transit in the winter. When an ice storm destroyed the wires powering Madison's streetcars back in the mid-1930s, those streetcars were replaced by buses which were still robust enough to safely operate in windy and snowy conditions, but could operate without the constraint of rails and wires. Even with today’s state-of-the-art light rail technology, ice and snow can still wreak havoc on rail switches and electrification. In contrast, buses just need plowed streets and proper tires to handle most winter conditions.

But advantages aside, riding the bus in winter presents a particular set of challenges and frustrations beyond just dealing with the cold. In the worst of conditions, chronic delays mean buses struggle to make connections, amplifying the problems of low service frequencies on many routes. Whereas missing a bus with 10-minute frequencies may be a minor inconvenience, missing a bus that only runs every half-hour or hour can be disastrous, especially in frigid weather.

Madison Metro bus lines attempt to run full service to the extent possible in poor weather, but resorts to shutting down entirely if conditions are particularly bad, stranding passengers who have no choice but to travel—a scenario that played out in December 2016 during the middle of UW-Madison’s finals and Commencement.

Madison is hardly the only city that has brutal winters that pose a challenge to bus operations, and transit operators in cities such as Minneapolis, Seattle, and Boston have developed special snow routes that are followed during particularly bad times. Those routes stick to the most well-maintained arterial routes, avoiding narrow streets and steep slippery inclines to maintain reliable service in poor conditions. Developing a similar system of core snow routes could be one way for Madison Metro to improve service reliability and maintain a baseline level of emergency service when winter is at its worst.

But one of the biggest problems with using the bus in the winter has nothing to do with the bus itself—the problem is in traversing the “last mile” of walking and bicycling routes connecting bus riders to their destinations. Poor and inconsistent maintenance of sidewalks, bike lanes, and bus stops present riders with an obstacle course on the way to and from the bus. Insufficiently cleared curb cuts, crosswalks, and bus boarding pads in particular can pose a significant barrier to the disabled.

Responsibility for proper maintenance of sidewalks is splintered between property owners and various governmental divisions, resulting in a confusing set of rules and responsibilities for dealing with winter conditions. In Madison, property owners are responsible for clearing the sidewalks and curb cuts adjacent to their property. Only if that walk is not cleared by noon of the day following a snowfall, and the issue is called in to the responsible city agency can that agency step in, clearing the walk itself and fining the owner.

But what if a snow plow or frost heaving has damaged a sidewalk? Take that complaint to City Engineering, responsible for sidewalk repair. What if your bus stop needs clearing? You could call Madison Metro, but the Streets department is in charge of the actual clearing—done “when necessary” after “priority routes are complete.” What if the crosswalk near your bus stop is obstructed? Well that’s also the purview of the Streets department, but also keep in mind, many of these departments have dispatch duties split between two halves of the city, so knowing who to call can be a real challenge.

The City of Madison has tried to make it easier to get help without necessarily knowing all the specifics of who to call by having one centralized website to "Report a Problem." The site allows citizens to select a general issue such as "snow removal," "sidewalk concern" or "bikeway concern" from the menu. Then, that report is supposedly sent to the relevant agency. While this makes it easier to "report a problem" in theory, the reality persists that responses are inconsistent, unreliable and follow a hidden agenda that seemingly puts facilitating non-car travel at the bottom of a list.

A step toward addressing the hidden bias toward car travel by Madison would be to make the "report a problem" priority list more transparent. Revealing the accountable department and providing a legally-mandated policy dictating how agencies must consistently respond will help address the needs of Metro riders. It could also be helpful to be able to upload a small photograph of any problem (a feature currently available for some—but not all—types of problems on the Report-a-Problem form, and notably a recommendation of the 2018 report of the Bicycle Facility Maintenance Workgroup).

The sense of a hidden bias against the winter needs of the non-driving public is reinforced by the city’s priorities being quite unclear. The Snow Plowing Priorities Report uses vague terminology like “when necessary” and “priority routes,” without actually explaining what the specific criteria are for when and where snow clearance is performed on bus stops and city-maintained sidewalks and crosswalks (where more specific information is available, multiple documents seem to exist, with conflicting details).

Contrast this with cities like Boston, where they publish a detailed inventory of bus stops cleared within 24 hours of a snowfall, or Minneapolis’s comprehensive ranking of transit snow removal priorities. A similar degree of transparency from Madison’s authorities would be a welcome improvement. And surely it can’t be impossible for our Streets department to commit to a timelier cleanup of crosswalks than their current policy, which states it may take as long as 4 weeks before they get to all crosswalks. That timeline speaks volumes about the real priority the city gives to pedestrians and transit users.