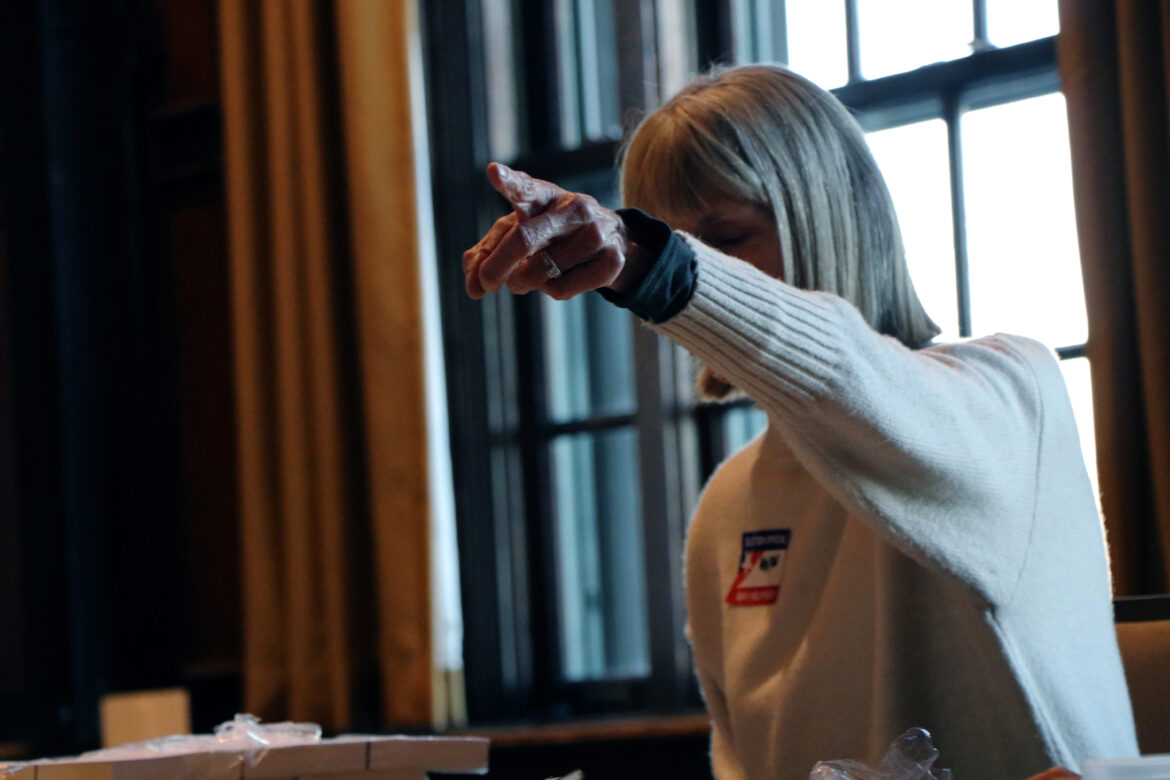 Madison Commons reporters are out telling Election Day stories across the Madison community.
Check back for updates throughout the day. In the featured photo above, a poll worker directs activity at the Memorial Union on the University of Wisconsin–Madison campus. Photo by Owen Shao/Madison Commons

11:30 p.m. While in some states the winners had already started celebrating their victories, in Wisconsin the voting was still going on.

There were activists in Madison urging people to vote. “I’m sorry, I can’t vote because I’m not a U.S. citizen,” a young man replied.

Anvar Khamitov, 27, a graduate student from Kazakhstan, compared elections in the United States to those in his country.

“First, it seems everyone is involved in this process,” he said. “When I came to class today, my professor started his lecture with this topic, urging us to vote. Second, advertising is everywhere. On YouTube, all videos start with election ads. Thanks to them I now have some knowledge about the candidates and their programs. This is something that is harder to see in my country.”

Voters favor getting time off from work to cast ballots

10:30 p.m. — Several Madison voters voiced their opinions Tuesday afternoon that election days should be a day off work.

As of 2022, Wisconsin law requires employers to give employees a minimum of three hours off of work to vote according to the Department of Workforce Development. However, Wisconsin is not one of the 24 states that require employers to compensate employees with paid time off in order to vote, much less having the entire day.

Dawn Black, the chief inspector at a polling location at Sandburg Elementary School on Madison’s northeast side, believes that not only should voters have off work, but schools should have the day off as well.

“The schools are so packed,” Black said. “They had to clear out a whole classroom for us.”

Sandburg Elementary’s school day ended at 4 p.m., creating a pocket of chaos at the front of the building as students rushed out, teachers tried to direct students to waiting parents and voters looked to enter the building.

While not all voters had to deal with this rush, many still concluded that it would be beneficial to have the day off for elections.

“Hypothetically we want as many people as possible to be able to participate as possible,” said Caleb Kulich, a Madison resident. “Even if it a small number of people that are affected by needing to go into work and that precludes them from voting, that’s an issue. I think having time off to vote would be beneficial.”

Calm before the storm

9:50 p.m. — Throughout the year, the state Capitol building is typically filled with legislators and tourists, but not during Election Day.

Election season is the busiest time of the year for those up for reelection, moving their business outside of the Capitol building for months leading up to Election Day. With the building being rather empty at 3:30 p.m. on Tuesday, Capitol tours face fewer obstacles, said a Madison State Capitol tour guide.

“Ironically, it tends to be a much quieter time here at the center of politics [in Wisconsin] even though it is election day,” they said. “Because it’s quieter, that means on tours, you get to see a lot more of the building. So you get a quieter tour, but that’s because everything is happening outside of the building.”

Outside the building, state Rep. Gae Magnafici (R-Dresser) awaits her third election as a member of the Wisconsin State Assembly. This time around, Magnafici chose to campaign less intensely than years past.

“I think people are just sick of it…I said no to text messages, I didn’t want any text messages going out. I sent three mailers out this time, that’s enough,” Magnafici said.

Magnafici emphasized the importance of running for a position without attacking the other side.

“People already know who they are going to vote for…they aren’t interested in some catfight,” she said.

8:45 p.m. — Voting is extremely important, especially in a swing state like Wisconsin. Running a smooth election in Dane County, the second-largest county in Wisconsin, is vital for Wisconsin's elections.

“There have not been major problems at all,” said Dane County Clerk communications representative Melanie Conklin.

Despite this controversy, voter turnout has been strong, according to Conklin.

“Earlier [Dane County Clerk Scott McDonell] said he was predicting an 85% or higher voter turnout in Dane County,” Conklin said. “An additional 1,000 ballots had to be ordered. That is a good sign for voter turnout.”

McDonell said on Twitter at 7 p.m. that “voter turnout is trending high, and possibly at 90% in some places.”

He was not available for an interview.

Abortion is on the ballot

8:40 p.m. — Wisconsin Statute 940.04, which bans abortion at any stage of pregnancy without exception for rape, incest, or health of the patient, is on the ballot for the Wisconsin 2022 General Election, taking place on Nov. 8. The questions voters will be asked is: Should it be repealed?

Democratic candidates have run on the platform that they support a woman’s right to choose. Republican candidates have largely supported the contrary: sweeping abortion bans.

Family planning is an issue close to many in Wisconsin, as health and well-being in the state has declined over the last couple years according to the Wisconsin Population Health and Equity Report Card released last March.

“Abortion is a really important issue, especially for people with intersecting identities, ” said Claire Borchers, a junior at the University of Wisconsin-Madison majoring in human development and family studies, with certificates in gender and women's studies and disability rights and services.

“Without family planning, people don’t get to live to their fullest potential, especially queer people, disabled people and people of color.”

8:35 p.m. — According to the Wisconsin Elections Commission, Dane County saw about a 55% decrease in absentee voting from the 2020 general election.

The county said 113,209 absentee ballots of the 123,266 sent to voters who requested them were returned by this morning. Voters returned 48,319 of those ballots in person, while the rest were mailed in.

In Wisconsin, absentee ballots will be counted if they are received as late as 8 p.m. on Election Day when voting closes.

6:30 p.m. — Election officials have faith in the voting process as community members file into the Ward 8 polling station on the east side of Madison to cast their ballots in the midterm election Tuesday.

Madison poll worker Ali Kane describes her motivation to work during elections since 2020 and why it is important to her.

“I was always interested in the [voting] process because of all the issues that everyone talks about. We [all] do it but we never really know how it's processed. Voter suppression is a huge thing for me and I want to make sure everybody has that equal right. That’s super important to me. Every vote is going to definitely count and I want to make sure it is counted correctly,” Kane said.

“The whole process is solidified. There’s no way around it. We work [hard] to make sure of it,” Kane said. “There’s a lot of integrity with the people and relationships that we build just by working together to make every vote count. I think that’s important for everybody to know.”

5:30 p.m. — A street away from the polling center at the Chazen Museum of Art, Madison, voters wait in another line — the one for a free slice of Ian’s mac n’ cheese pizza.

They handed out 100 slices in the first 30 minutes of the initiative, according to an Ian’s employee. University of Wisconsin–Madison sophomore Olivia Rebek said she was excited when she realized she could get free pizza for voting.

“I think everybody should vote and it’s kind of a good way to promote people, especially college students who want a free meal.”

According to a tweet from Ian’s Pizza, the stores stayed closed until 5 p.m. to ensure their own staff had time to vote. All three Madison locations are dishing out slices.

5:50 p.m. — Union Cab, a local worker-owned taxi company, is offering free rides to and from polling places in Madison and adjacent communities during Election Day.

Voters can schedule a ride to a polling location for free and call for a ride back after they finish voting. Union Cab started offering free transportation to the polls as early as 2011 but officially started doing the service for election days in 2013, said Union Cab business manager Bill Carter.

“It’s a union’s desire to serve the community and be a good community partner,” Carter said.

Union Cab of Madison Cooperative — which was founded in 1979 by ex-Checker cab workers on strike — also has to simultaneously handle normal business while doing the free rides today.

“I’m sure that we’re doing a lot of business today. We have to squeeze it in of course with all of our regular business, so it does make it challenging,” Carter said. “If it’s a busy election, we usually get quite a few requests.”

While Union Cab’s free Election Day service was partially funded by other local organizations in past years, Union Cab is fully funding it this year, Carter added.

Bill Carter voted earlier today and waited behind five or six people in line, which he said was busier than he usually sees for Election Day. Early calls from Dane County Clerk Scott McDonell show that Dane County is projecting a roughly 85% voter turnout, according to McDonell’s Twitter page.

“There’s no discussion of any political matters … it’s not a partisan type of thing,” Carter said of the free rides. “Whoever you’re voting for, we’re taking you to the polls. We just want to encourage people to get out and vote.”

No reports of scam calls to voters in Dane County

4:15 p.m. — The Marathon County Clerk’s Office warned voters Monday about scam calls falsely claiming polling places would be closed on Election Day. The caller targeted elderly voters, asking who the person will be voting for, then telling them their polling place would be closed. The caller spoofed, or disguised, their phone number to match that of a local business.

Marathon County Clerk Kim Trueblood stated in an email that she had spoken with the receptionist at that business. The receptionist indicated that they had been getting calls last Friday as well as Monday. “Her comments led me to believe that the calls were coming in from different areas of the state, not just Marathon County,” Trueblood wrote.

In an update this afternoon, Trueblood said she had not heard of any additional reports of scam calls to voters, and that so far elections in Marathon County are running smoothly. Dane County clerks have not seen any instances of such fraudulent calls here, per a phone call to the clerk’s office. Scott McDonell, a Dane County clerk, said clerks have reported no major issues or unusual problems and are seeing high voter turnout, predicting a final county turnout of 85%.