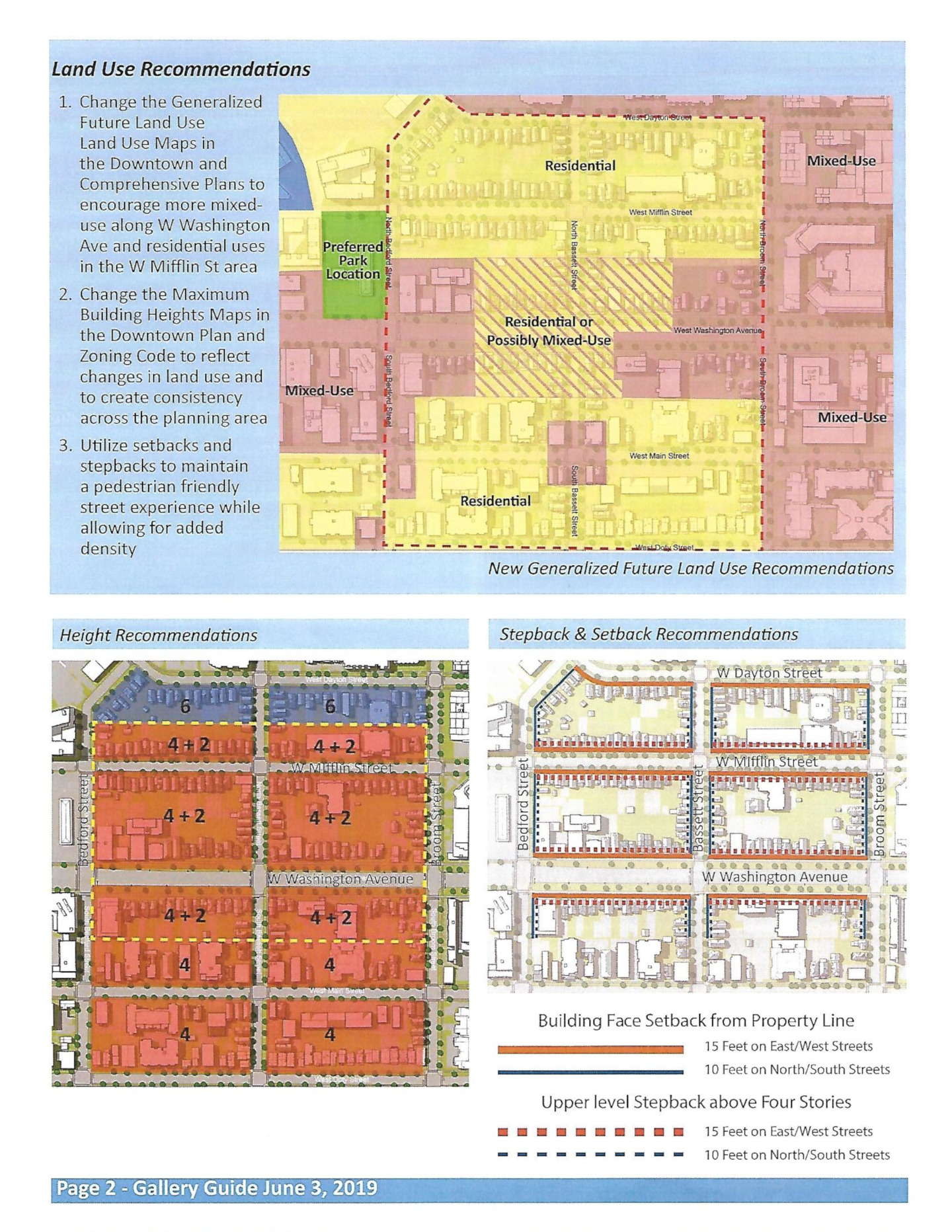 The City of Madison planning team charged with guiding the redevelopment of Madison’s Mifflin neighborhood showed off its final recommendations at the project’s last public meeting June 3 at the Madison Senior Center. 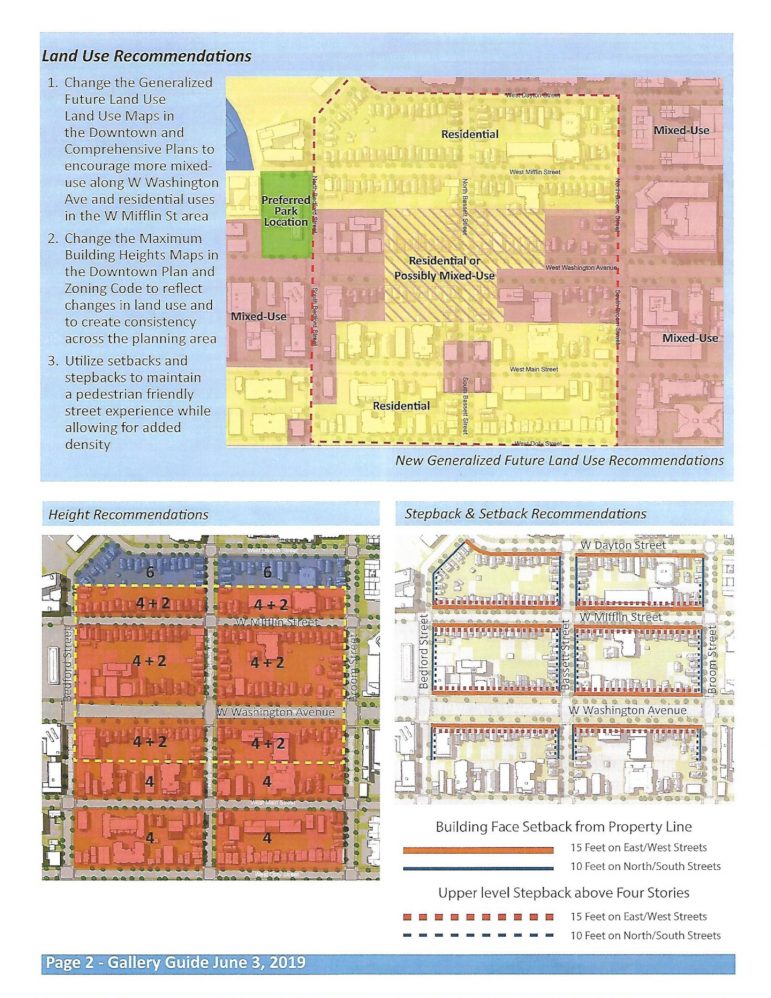 The team’s recommendations covered a wide range of topics, from specific proposals regarding building height maps and land usage, to broader ideas about increasing diversity and inclusiveness in Madison’s downtown area.

Based on feedback from residents since the project’s first meeting in October 2018, the Mifflandia team flipped the City’s 2012 Comprehensive Plan’s guidelines for residential and business land usage in the area. The new plan reserves Mifflin and Main Streets for residences and concentrates businesses along W. Washington Avenue.

The group also proposed a “four-plus-two” height restriction — in which buildings’ street-side facades would be limited to four stories, followed by a “set-back” that would allow building up to six stories farther back from the street — for all buildings from W. Mifflin Street to W. Main Street.

Project coordinator Rebecca Cnare said the area’s “public-to-private transition” — how the public area of the street transitions to the private area of homes and businesses — was emphasized in planning as well.

On this note, the Mifflandia team recommended a number of improvements to make it safer and easier to walk and bike in the area. Under the proposed plan, W. Washington Avenue would be restriped and reduced to two traffic lanes with buffered bike lanes in both directions. Bassett Street, meanwhile, would receive a proper bike lane complete with plastic delineators to better separate car and bike traffic.

Improvements for pedestrians and bus users would include flashing beacon crosswalks, pedestrian refuges in W. Washington crosswalks, and better bus stop amenities, like covered waiting areas. New and existing public art would also be integrated throughout the neighborhood. 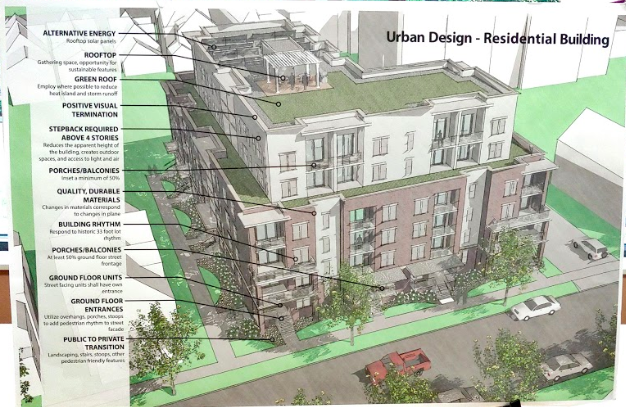 These measures, beyond improving residents’ quality of life, are aimed at increasing the Mifflin neighborhood’s sustainability, a goal that also shows up in the project’s proposed building guidelines. The team recommended promoting sustainable building practices such as green roofs and walls, responsible stormwater management, rooftop solar panels, and integration of vegetation wherever possible.

Residents at the meeting, however, raised concerns about the neighborhood’s affordability for students following redevelopment and the possibility of the area’s buildings becoming too large, boxy and indistinguishable. Several attendees also questioned whether the City would actually be able to purchase the lot at W. Washington Avenue and Bedford Street in order to build a park that Mifflin-area residents have long desired.

Cnare responded to these and other concerns, saying the team wants to make Mifflandia an Urban Design District to ensure buildings “have this eclectic, funky, creative quality that...gives the neighborhood its dynamic feeling.”

Cnare said Urban Design Districts are meant to give extra attention to the development of important areas of the city. In the Mifflin area’s case, the designation might show itself in things like the preservation of historic landmarks like the depot building on the proposed park lot and the inclusion of local art throughout the neighborhood.

On a broader level, the city planners said they hope all these enhancements will encourage economic and entrepreneurial development in the neighborhood. Combined with ongoing collaboration between residents, city planners, police, social services, and other entities, the team hopes to make the area desirable and inclusive while meeting Madison’s growth needs.

Cnare emphasized, however, that the City is only a planner, not a developer; so, while City guidelines will inform the look and feel of the area overall, smaller details will largely come down to developers’ priorities. 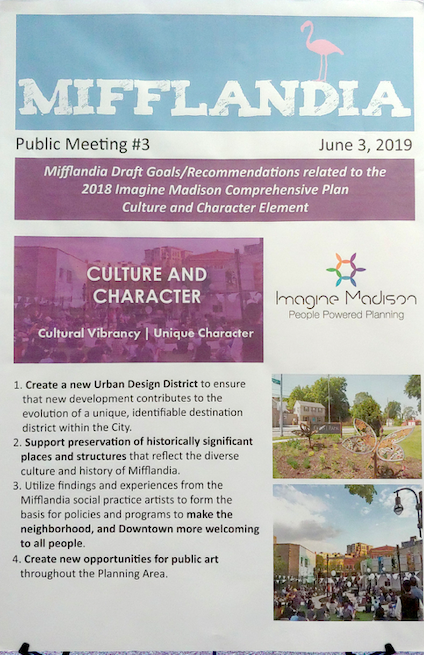 This distinction also means that it will be some time before residents start seeing the plan’s effects. Alder Mike Verveer said it will take some time for the recommendations to be amended and approved by the City Council, “perhaps even into next year.”

Changes will then roll out gradually in the next five to ten years as the City and private developers make Mifflandia a reality.

More information on the Mifflandia project and past meeting materials can be found here.