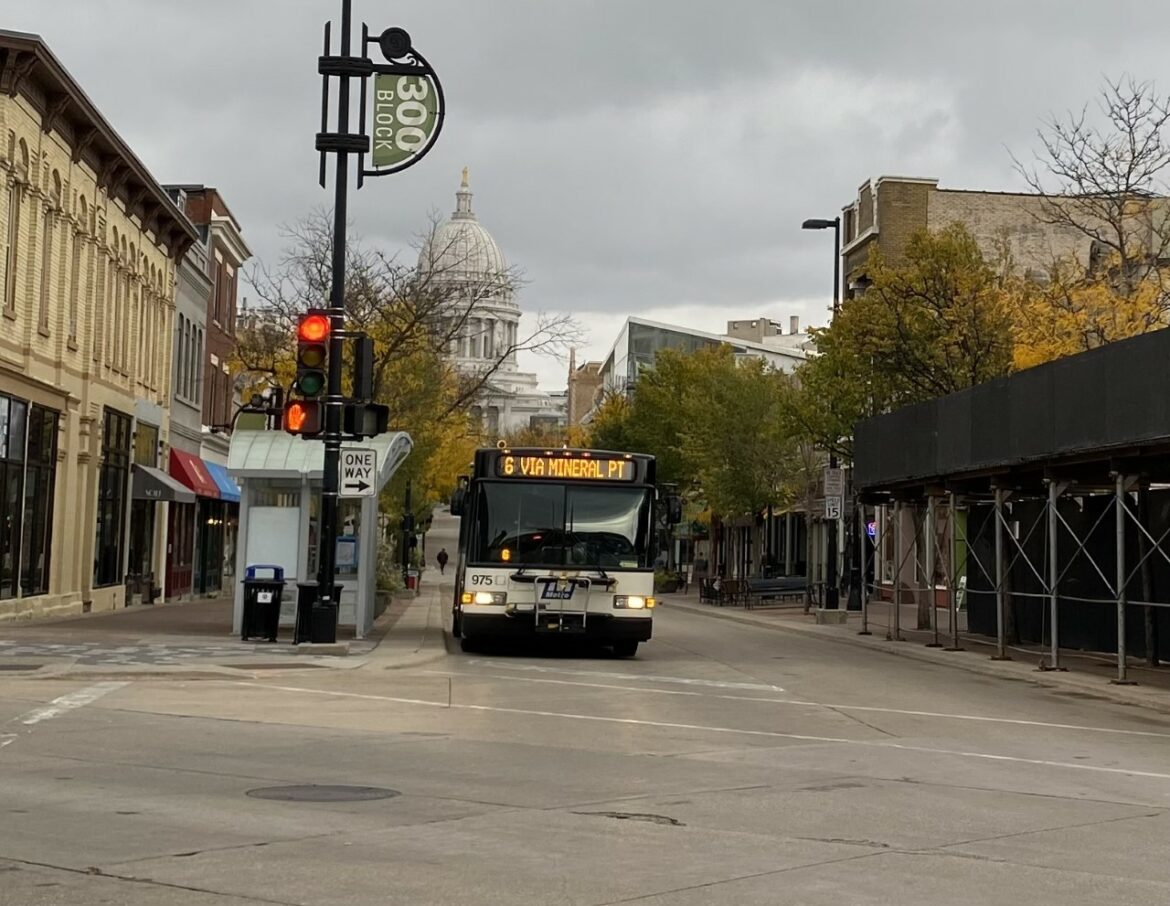 The Madison Metro Transit redesign has caused a mixed public debate about how to equitably improve public transportation in the city.

For the past two years, the City of Madison has been planning to overhaul its Metro Transit bus system with a redesigned network that will focus on increasing ridership. But the change has ignited a public debate about how to best suit resident transportation needs, particularly for low-income people who more often rely on public transit.

Since 2020, the city has worked with Jarrett Walker and Associates, a Portland-based transit consulting firm, to create a new Metro Transit network that consolidates pre-existing routes to make it faster for residents to travel between two destinations. That approach was favored among the community, according to Mike Cechvala, transportation planner for the City of Madison Department of Transportation, who led the redesign project.

“The direction that our policymakers and most of the public agreed with was that we should be more towards the ridership end of the spectrum,” Cechvala said. “In other words, we should go in the direction of having fewer routes that are more direct and more frequent.”

The current system is more centered around coverage, Cechvala added, meaning that it reaches more people but takes a longer time to ride on. The new network would make most bus routes run every 15 to 30 minutes. The average wait time under the existing system is 30 to 60 minutes.

On June 8, the Madison City Council voted 14-6 to approve the redesign along with a series of amendments aimed at satisfying resident complaints about the draft plan, according to the Wisconsin State Journal. The redesigned network, which will also change the bus route numbers to a letter system, is set to be implemented in June 2023, Cechvala said.

The new network is projected to enable the median Madison resident to reach 44,000 jobs within 45 minutes by transit and walking, which is an 83% increase over the current system, according to the City of Madison’s redesign draft plan. That increase also holds true for people of color, who will be able to access 19,000 new jobs with the new network.

After a draft plan for the redesign was released in January, the city held a series of community meetings in neighborhoods across Dane County to receive public feedback on the project and raise awareness for it. But some residents and local organizations felt that the community engagement process was too limited and excluded low-income residents and people of color.

Madison-area advocacy groups, including the NAACP branch of Dane County, South Madison Unite!, Southdale Tenants’Association and Madison Area Bus Advocates, penned a joint letter to the Madison Transportation Policy and Planning board in June opposing the draft plan of the redesign.

One of the central complaints in the letter was that the city failed to adequately reach out to the community during its engagement campaign for the redesign.

“Metro’s plan for public engagement has leaned heavily on arms-length methods of outreach, flyers and emails to local organizations and on virtual meetings,” the letter said. “This approach focused its reach on communities that were already enfranchised, and it disadvantaged those that were not.”

Madison District 8 Alder Juliana Bennett, who represents a large portion of the University of Wisconsin-Madison campus and about eight blocks south of it to the west of North Park Street, said the redesign plans left out considerations for population disparities, like people not having a car.

“For certain areas like the north side, you pretty much have to have a car to live,” Bennett said. “And we know that the north side has more populations of underrepresented people, so those are

the areas that need to have access to bus services.”

Bennett said that the initial redesign draft plan included cutting a bus route on the north side that was the only way for many local residents to access a grocery store in that area. While the problem was fixed in the amendment process, residents were left feeling excluded in initial conversations about the planning, she said.

“One of the concerns about [the redesign] is that the city hasn’t done a good job about engaging underrepresented communities,” Bennett said.

Bennett said that she only heard about a community information session on the redesign in a District 8 neighborhood through Facebook and never received an email about it. She said another alder, who she preferred not to name, had a similar experience not knowing about a redesign event happening in the neighborhood she represents.

The city conducted a public outreach survey of 3,332 people from February 2022 to May 2022 to evaluate the community response to the redesigned network. It found that Black Indigenous People of Color (BIPOC), low-income and frequent rider populations had a “plurality” against the original draft network. But, a broader measure of residents found that another “plurality” – or 40% in support compared to 27% not – felt that the redesigned network would be better for Madison as a whole.

Chris McCahill is managing director of the State Smart Transportation Initiative and a member of the City of Madison’s Transportation Commission. He said that although some residents may face longer walk times to bus stations, the redesigned network will generally benefit most residents.

“I think most people are going to have better service, most people will be able to reach more places faster,” McCahill said. “The tradeoff will be that some people may need to walk a little farther to the nearest stop in order to do that.”

For Greg Jones, president of the NAACP Dane County branch, the Metro Transit redesign is a welcomed change for the community.

“Redesigning the Metro Transit system is always worthwhile,” Jones said. “It is a fundamental resource for people in the community and can provide not just transportation, but also meet a level of quality of life.”

But that change has led to some community residents expressing uncertainty and complaints to the NAACP about the changes to service under the new bus network, Jones said. Those

complaints include longer walk times to bus stops, decreased access to grocery stores and general confusion about where the new

Jones said multiple people expressed concern to him about the redesign’s effect on access to the Walmart Supercenter and WPS Health Solutions facility located off of the Beltline Highway south of Lake Monona. That Walmart location is frequently used for shopping and WPS for employment purposes, Jones added. The new redesign consolidates the former 11,12 and 16 bus routes that serviced that area into one G line. 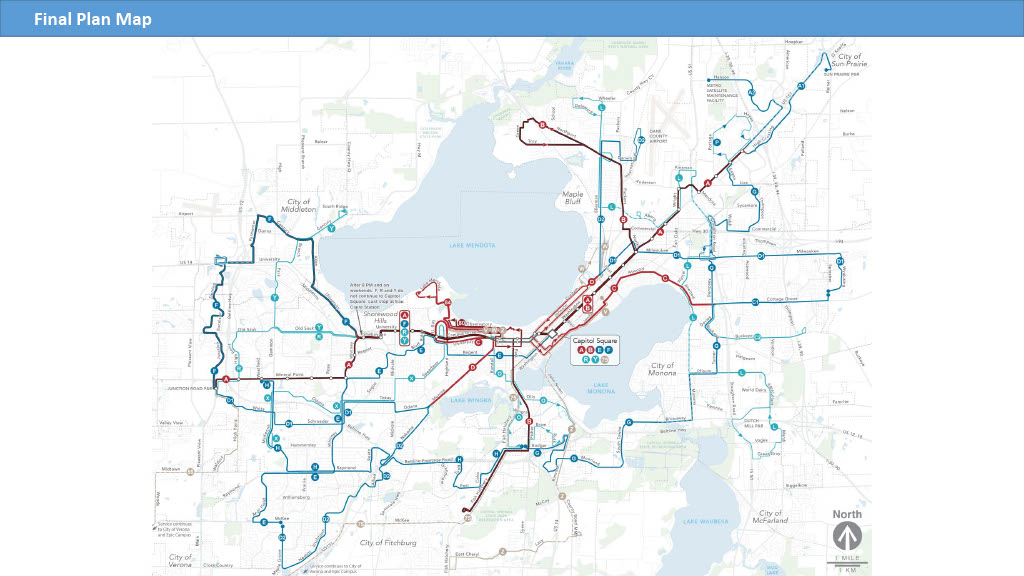 “The routes being affected were not clearly articulated to the community and the members who depend on public transportation who live in those communities,” Jones said. “That was a misstep by the city.”

The NAACP also heard initial concerns about the redesigned network making it difficult for south-side residents to reach UW-Madison from Park Street, and Allied

Drive residents not being able to efficiently travel east to Monona. But both of those concerns were resolved with amendments to the initial redesign map, Jones said.

The revising process for the redesign included more than 18 potential amendments, most of which were cost-adding or cost-neutral, Cechvala said.

The city adopted a few of those amendments and some added new routes to the network in response to public input, Cechvala said. One of those added routes was the O line on the south side that will run along Fish Hatchery Road, Olin Avenue and Badger Road north to UW.

Those amendments were limited to budget constraints since the project is relatively budget neutral, Cechvala said. That sentiment about problems with funding was echoed by McCahill, who said the final Transportation Policy and Planning Board meeting on the redesign revealed that funding problems contributed to resident complaints.

“What became clear I think to everyone on the board was that the reality is we need more resources for transit,” McCahill said. “There’s just not enough money to give good transit to everybody.”

McCahill added that the Wisconsin state Legislature has blocked the City of Madison from creating its own Regional Transit Authority, thus restricting how much money the city can raise to fund transportation initiatives. Transit authorities allow cities to use certain taxes to support transit networks and provide oversight.

The City of Madison’s transportation funding is set to drop by 38.1%, or nearly $7 million, in 2023 as the city will decrease its Metro Transit subsidy for one year to fully receive federal transit aid, according to its 2023 executive operating budget. The subsidy is set to return in 2024.

The last major planning component for the Metro Transit redesign is a Title VI equity analysis report that is mandated by the U.S. Department of Transportation. It will determine if the redesigned network will disproportionately impact or not benefit low-income people or people of color, according to Cechvala. The report could also lead to changes to the network if disparities are found.

Greg Jones said that he expects the city to release the full equity analysis report to the public. He added that he has made a “tacit agreement” with the city to hold a community meeting alongside the NAACP concerning the report, and hopes that they can host the event in a Black church or local Black Catholic center.

“The NAACP’s position is that this equity analysis – once completed and ready – should be thoroughly vetted,” Jones said. “Then, there should be a conversation with the community. This should be a transparent, open process, because it’s going to lead to policy. Policy is what’s going to guide this city and give this city the face of either equity and or inclusion.”