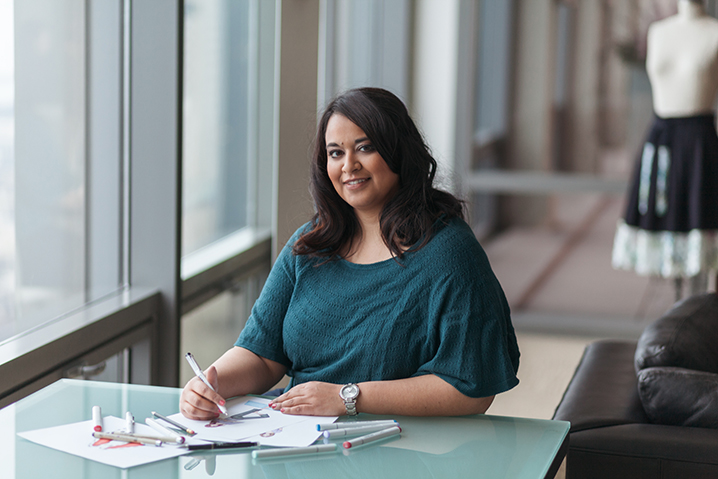 Practicing in pharmacy for nearly a decade, Bhavana Jain, who graduated from UW-Madison in 2002, is now dipping her toes into the fashion industry, interweaving professional apparel and cultural identity into her designs.

“For years when I was working, life became a little bit exhausting for me. I just needed another creative outlet to explore,” Jain said.

Following her lifelong passion for arts, she continued to work as a full-time pharmacist by day while enrolled in design classes at night. In 2018, Jain finally launched her fashion brand, turning her hobby into a solid business enterprise.

Indeed, Jain is not the only college graduate who works in jobs not strictly related to their majors. In fact, it is a national pattern.

According to a 2013 study conducted by the Federal Reserve Bank of New York, only 27 percent of college graduates landed a job closely related to their majors.

The trend continues to grow for people who graduated with a Bachelor of Arts degree, as most liberal arts degrees do not point to distinct career routes; rather, they provide a set of skills that help job seekers maneuver the realm of the profession they ultimate choose.

“The idea with the liberal arts education is that you are getting training in a number of different types of disciplines, and this forces you to think really creatively when you face problems,” said Rebekah Pare, the associate dean for the College of Letters and Science career initiative at UW-Madison.

These skills can be hard to quantify in the short-run, however, as traditional liberal arts curriculum encompasses abstract subjects such as philosophy and history.

Pare says college students often think in a limited way when it comes to their education: They are only focusing on the content of classes they are taking but often fail to acknowledge the fundamental learning skills that are working behind the scenes.

“They took an English literature course, and they think, ‘what is the use of that?’” said Pare, “What they don’t think about is how are they reading, what are the skills they are using to extract content, how are they evaluating sources when they are doing critical analysis.”

Recent data shows hiring managers are actually craving those skills. According to a survey of American Colleges & Universities released in 2015, close to 91 percent of participating employers voted that employee’s critical thinking and problem-solving skills are more important than their college majors.

Sarah Eskrich, a UW alum who works for a local democracy initiative, is the master of these “soft” skills. Eskrich has changed gears a few times since graduating in 2008 with a degree in political science. She once worked in the public health campaign industry, served roles in nonprofit organizations and was elected to the Madison Common Council.

“People can do really different things, and I think the key is just knowing how to define your skills and talk about your skills as something that is transferable and valuable in various industries,” Eskrich said.

In the long run, liberal arts majors have even outpaced average in annual incomes. According to the Census Bureau’s American Community Survey, at age 40, the average salary of male graduates with college-level degrees was $111,870, whereas liberal arts majors ticked up their earnings to $131,154.

Mid-career professionals with high salaries are working in management and business sectors, along with occupations asking higher-level of education such as law. Liberal arts majors are more likely than STEM graduates to enter those fields.

“Employers are looking for people who can lead people,” said Mark Richardson, who is the owner of Unfinished Business, a Madison-based career consulting company. “Those soft skills become much more important in leadership positions versus entry-level positions or a specific discipline.”

Yet, rural higher education institutions are approaching a different direction.

Sweet Briar College, a Virginia-based women’s liberal arts college, almost permanently shut down in 2016. Last year, the University of Wisconsin-Stevens Point planned to cut 13 majors, including six majors in humanities and arts, as part of its 2018 Point Forward plan, but abandoned the idea in April. The programs that were slated to be cut will now be “retooled,” according to the university.

“I think the loudest voice of the business community in Wisconsin comes from Wisconsin Manufacturers and Commerce,” the conservative-leaning statewide chamber of commerce, said Noel Radomski, managing director of the Wisconsin Center for the Advancement of Postsecondary Education, “You have the more established companies in Wisconsin, which tend to be heavy manufacturing. They tend to like careers in technical education.”

Radomski said state legislatures have pushed public institutions reorienting back to majors like engineering and computer science as MidWest rural areas were hit the hardest by the primary sector downturn over the past 40 years.

Michael Apple, a professor of the School of Education at UW-Madison, echoed the fact that when making decisions in choosing majors, many students are weighing current economic competitiveness.

“Many family farms are going under and it is very hard to make a living. That means they are convinced to send their kids to go to college and many students will still want to go, but they will go to technological colleges and they will look for technological occupations that guarantee them something that is currently missing,” Apple said. “It is a real economic crisis.”

The economic picture, however, varies widely depending on geographical locations. On the national level, high-tech startups such as Slack Technologies and Unisoft are ramping up its recruitment of humanities and liberal arts graduates.

“If you go and talk to more newer-established companies, they are arguing ‘we need more liberal arts-minded students, we need students with strong liberal arts foundation,’” said Radomski.