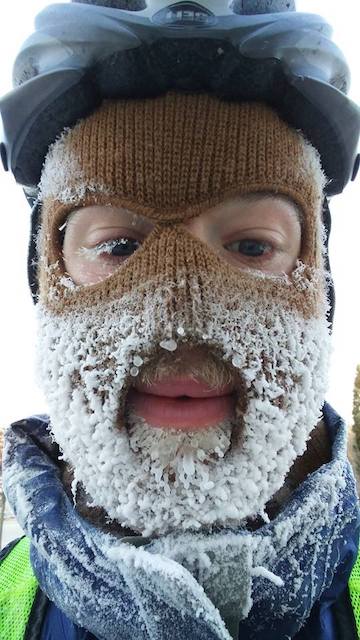 In the early hours of January 26, the temperature in Madison reached minus 20 degrees due to the polar vortex. By the time Tom Wilson was walking his dog that Saturday morning in his neighborhood on Proudfit Street and West Main, the temperature had only risen to about minus 13.

As he plodded through those frigid conditions Wilson noticed a man and a woman on a corner who looked to be in some distress and walked over to see if something was wrong.

“Can you help me?” the woman asked. She explained she had found the man out in the cold, incoherent, and she didn’t know what to do.

Wilson turned his attention to the man. He had no hat, no gloves, and was missing a shoe. A toe was sticking out of his sock. He asked the man a question, but he didn’t respond. Looking closer, Wilson noticed the hairs on the man’s hands were freezing and came to realize he was incoherent due to severe hypothermia.

Wilson, a longtime Madison resident and a National Guard veteran who was deployed to war zones multiple times, went into crisis management mode. He asked the man to come back to his home to warm up, but the man didn’t want to move because the cold was causing him so much pain. Trying to coax him while dealing with his now excited dog, Wilson told him, “It’ll be okay. We’re going some place warm.”

“He kept saying he was gonna die, over and over again,” Wilson said, but he eventually convinced the man to come with him.

Back at his house, Wilson and his wife Colleen gave the man a warm hat and covered him in blankets, then held his hands in theirs to warm them up. Wilson said the man’s hands were still soft but badly frostbitten. The man’s left foot, though, the one missing a shoe, was “like putting my hands on a steak in the freezer,” Wilson said. “I’ll never forget that feeling.”

They called an ambulance and continued trying to warm him, but after a few minutes inside, the man was in severe pain as the warmth returned feeling to his body.

Along with feeling, the man regained coherence. Despite the pain, he thanked Wilson and his wife profusely for their aid. As they waited for the ambulance, Wilson tried to keep the man’s attention away from his left foot, fearing he would go into shock if he realized how badly the cold had damaged it.

After what Wilson said felt like forever, but was likely only ten minutes or so, an EMS team arrived, loaded the man in the ambulance, and disappeared back into the cold.

As the story has spread Wilson’s friends and neighbors have naturally had questions about the situation. “Everyone keeps asking me, ‘Was he drunk? Was he on drugs?’” Wilson said. “But who cares how he got there? That’s not what’s important right now.”

Conditions like Madison has been experiencing for much of the past month are dangerous for anyone, but for the state’s most vulnerable communities the sub-zero temperatures can be lethal.

During extreme weather conditions like the recent polar vortex, Madison’s limited homelessness resources are placed under extreme strain as this population’s need for food, warmth, and shelter turns critical. This is especially true for popular facilities like The Beacon, which acts as a one-stop shop providing housing and employment assistance, basic healthcare, transport to and from night shelters, and other important resources.

As The Cap Times recently reported, though, this year’s polar vortex brought an outpouring of support from individuals and organizations across Madison hoping to help this community in crisis. First United Methodist Church acted as a temporary day shelter, Papa John’s donated pizza to The Beacon, Madison Metro helped shuttle people to shelters, and many others helped find and fund overnight accomodations for those that shelters could not fit.

For some, however, their situations make finding shelter more difficult. The Cap Times reported individuals with mental illnesses were reluctant, despite the cold, to spend the night at a shelter because they feared they’d be easy targets for theft and violence, sadly not an uncommon phenomenon in homeless communities.

LGBT+ individuals experiencing homelessness often have a hard time finding shelter as well. They face many of the same threats of victimization as those with mental illnesses, but they also must find a shelter that will accept their sexual and gender identities. According to the 2017 State of Homelessness in Wisconsin report compiled by the Institute for Community Alliances (ICA), “Many shelters in Wisconsin and throughout the United States are sex-segregated, and LGBT+ individuals often have difficulty finding shelters that are safe and welcoming.”

Shelter can also be harder to find for women, who are much more likely than men to be seeking shelter not just for themselves but for their children, according to the ICA. And according to the 2013 Dane County Homelessness Report, 28 percent of single women experiencing homelessness in Dane County cited “roommate/family conflict/domestic violence” as their primary reason for seeking shelter. These situations mean women often must find a space that is both safe and large enough to accomodate a family.

Satisfying all the varied needs of such a diverse group of people is challenging at the best of times. When the entire group must find shelter or be left to fend for themselves in arctic conditions, the task can quickly outstrip available resources. But as seen during the polar vortex, members of the Madison community stepped up when it mattered most.

If you are interested in donating to or volunteering at The Beacon, visit TheBeaconHelps.org for more information.