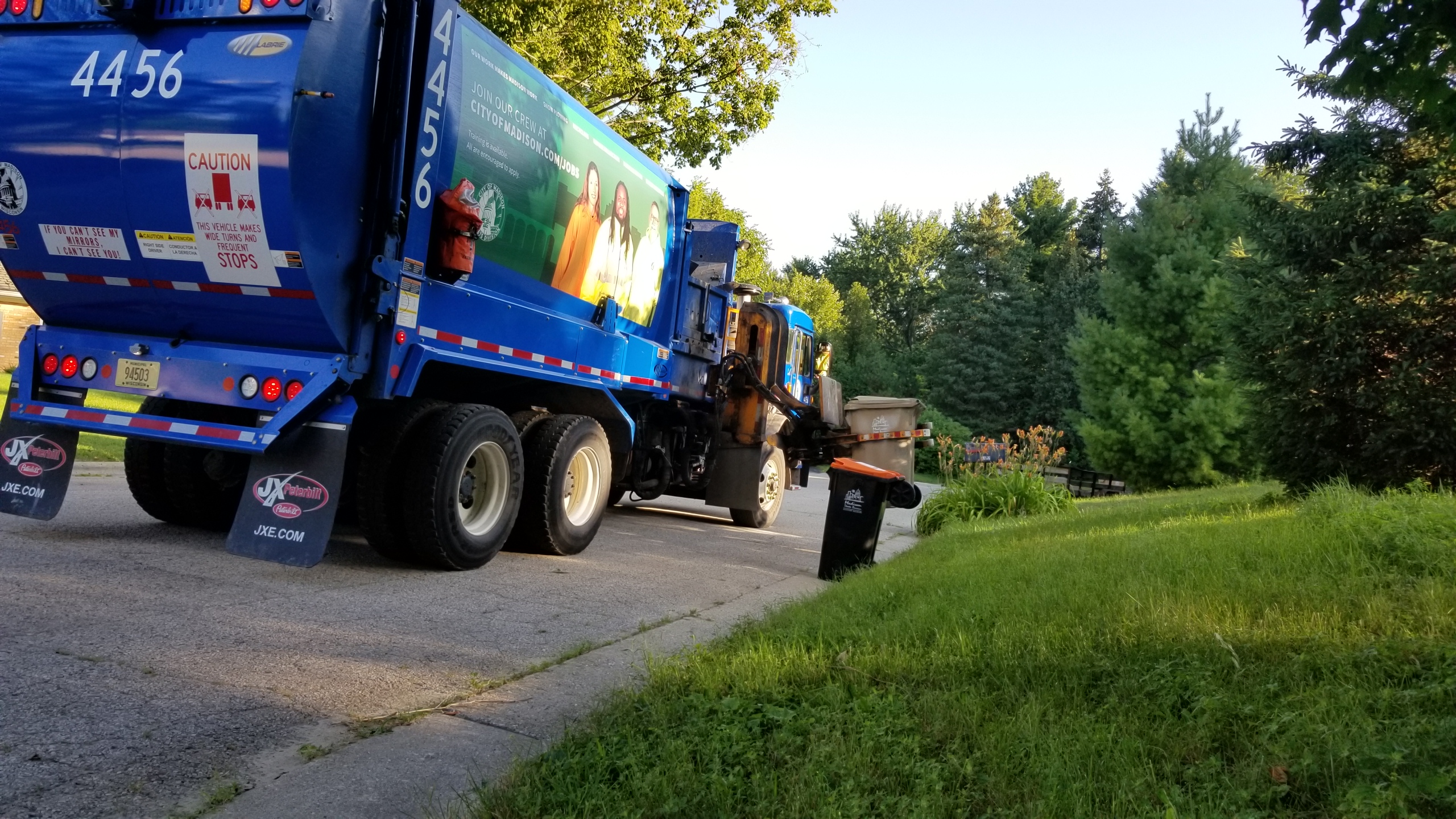 The City of Madison Streets and Recycling Department is revitalizing a food waste collection program that ended last year, thanks in part to a $39,000 grant from the Environmental Protection Agency.

Last year, the Madison Recycling Department shutdown the organics-collection program that had been running for seven years. This program eventually failed because of excessive amounts of waste coming from the Madison area that couldn’t be broken down by the privately owned anaerobic bio-digester, GL Dairy Biogas.

This bio-digester processes collected waste from food and cows into degradable matter that releases methane gas. The methane is captured and can be combusted to generate electricity or compressed for use as vehicle fuel. While waste is being processed by the bio-digester, contamination becomes the biggest issue, according to those who run the program.

Contaminants are anything that slow down the facility’s processes or are not able to be processed into biogas. This includes things like corn cobs and chicken bones, which are too tough to be broken down by the facility’s machines, or plastic, which never degrades. These materials are a nuisance, often leading to wasted time and resources cleaning it up, officials said.

Bryan Johnson, Madison recycling department director, recalled nearing the end of the previous program, “We gave [a bio-digester] about seven tons worth of food scraps that we picked up. One ton of contamination was left over.”

The new program, called the Food Scraps Collection Pilot, is centered on the goal of reducing contamination as much as possible. It seems to be doing just that. Over the first two weeks of collections with the new program, 2,160 pounds of food scraps have been collected with only one bin having to be left behind due to contamination.

Headed by Johnson, the recycling department has reformed their strategy to focus on dealing with contamination and began their new program earlier this month.

First, the usage of the term “food scraps” is quite intentional. Previous iterations of the program used “organics;” Johnson believes people misconstrued the word.

“It wasn’t concrete enough,” said Johnson, who often found strange and obscure objects in the bins. “Some of the more mistakes we had were deer heads, children's toys, and stuff that clearly had no business being in the cart.”

The department has created a guide it hopes will be more clear to participants as to what is and is not supposed to go into the bins. 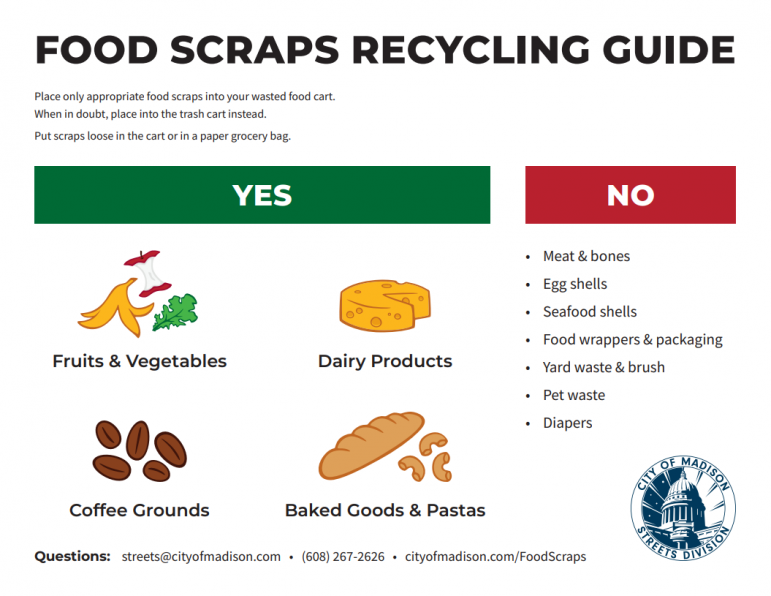 Guides were created for the previous program but due to the inability to effectively communicate to those involved, it was hard to update everyone on new restrictions. The department is now focusing on single-family homes on the west side of Madison. One hundred sixty five homes out of 691 eligible single-family homes from the west side signed up to be a part of the program.

Johnson said this will allow the program to operate in “the most controlled environment. We can contact the homes, we know people will be responsible, it’s a stable population.” Johnson said.

Increased communication with these households is a large part of the new strategy. Weekly emails on the amount of food scraps collected and the tags reading ‘Oh no!’ when a participant puts contaminated material are some of the ways the department has been reaching out.

“We’re trying to communicate so much, and all of it is really about keeping it clean,” he said. “If we can’t control that then we don’t have a program.”

The trucks that pick up the food scraps from these households have also been updated. “It’s a two operator job now. One person drives, the other person hops out, looks in the cart and if everything is clean they dump it out” into the collection truck, Johnson said.

The opportunity for a long-term solution to these contamination issues recently came into the picture when the city was awarded $39,000 in a grant from the EPA. This grant is meant to cover some of the charge for a study into the financial feasibility of constructing a public anaerobic bio-digester that could serve Dane County and surrounding areas.

There was discussion last year about a plan to create a bio-digester for the city of Madison that would be tailored to the trash that the city outputs and subverting contamination issues. However, the cost to build such a facility seemed in every way to outweigh the benefits.

Plans to build a bio-digester are now under consideration partly because the scope of the bio-digester expands to include other communities around Dane County like Sun Prairie and  Fitchburg.

The bio-digester needs to be regional because Madison simply does not have enough food waste to warrant the construction of a digester, Johnson said.

Johnson said the City of Madison Streets Division collects approximately 10,000 tons of food annually while the scale minimum for an anaerobic bio-digester tends to be around 20,000 tons. A regional bio-digester would ideally take food waste from areas like Sun Prairie, Fitchburg, and Waunakee to reach that scale minimum.

“In order to do food waste digestion, you need a large volume of organics and economies to scale,” said John Welch, director of the county Department of Waste and Renewables. “When you’re looking at the economics of these systems, we’re not going to be able to do it with just the food waste from Madison or any other community in the county. It needs to be a more regional approach and that’s what this grant is all about.”

Exactly how a digester would function on a regional scale is another question that the study hopes to provide insight to. Questions like, “what does it look like, where would a facility potentially be, who might be the ones running the facility?” Welch said.

Another reason why the bio-digester could be successful now is due to a unique interaction with the Dane County landfill. The landfill has completed the construction of a new renewable natural gas (RNG) facility this April. The facility cleans methane captured from the landfill into an almost pure form ready to be turned into compressed natural gas or CNG. The gas is then pumped into an interstate pipeline to be sold to CNG seller Kwik Trip to be used as fuel for vehicles.

If the county were to build their own anaerobic bio-digester, they would be able to take advantage of “a very unique part of our system that is not at any other landfill in the US. It’s what we call the ‘offload station’,” Welch said.

This part is a port where other anaerobic digesters can dump their CNGs to be filtered through Dane County’s facility for sale to the pipeline for a small fee. However, Welch said, the County is “not trying to make money out of that facility … it’s really about trying to help the area agricultural digesters continue to succeed.”

The potential revenue that a regional bio-digester might gain from methane dropped off at this facility is one of the many questions that the study will be delving into.

The study will begin after the Madison city council decides on a research proposal to invest in. After that, Johnson predicts the study will take one year to gain all of the information necessary to decide on whether or not building the regional anaerobic bio-digester is an appropriate investment.

In the meantime, the food scraps collection pilot will be Madison’s most tangible means of recycling food waste.

Public reaction to the pilot has been quite positive,. particularly related to the increased communication from the recycling department with weekly emails.

“Because there’s a community effort, I feel even more motivated. When you’re just by yourself and go in, you question, does this make any impact?” said Kelly Underwood, a program participant. “We’re all in this together and it’s really motivating.”

Johnson is committed to the success of the pilot program as a step towards making Madison. “as green a city as we can be ... The phrase I like is, ‘How do you eat an elephant? A bite at a time.’ We’re eating this elephant a bite at a time. Then what we can’t eat, we’ll put in the food scraps cart!”

The food scraps pilot program will end on September 20, when the advent of autumn will require all workers on the pilot to become leaf-pickup workers.