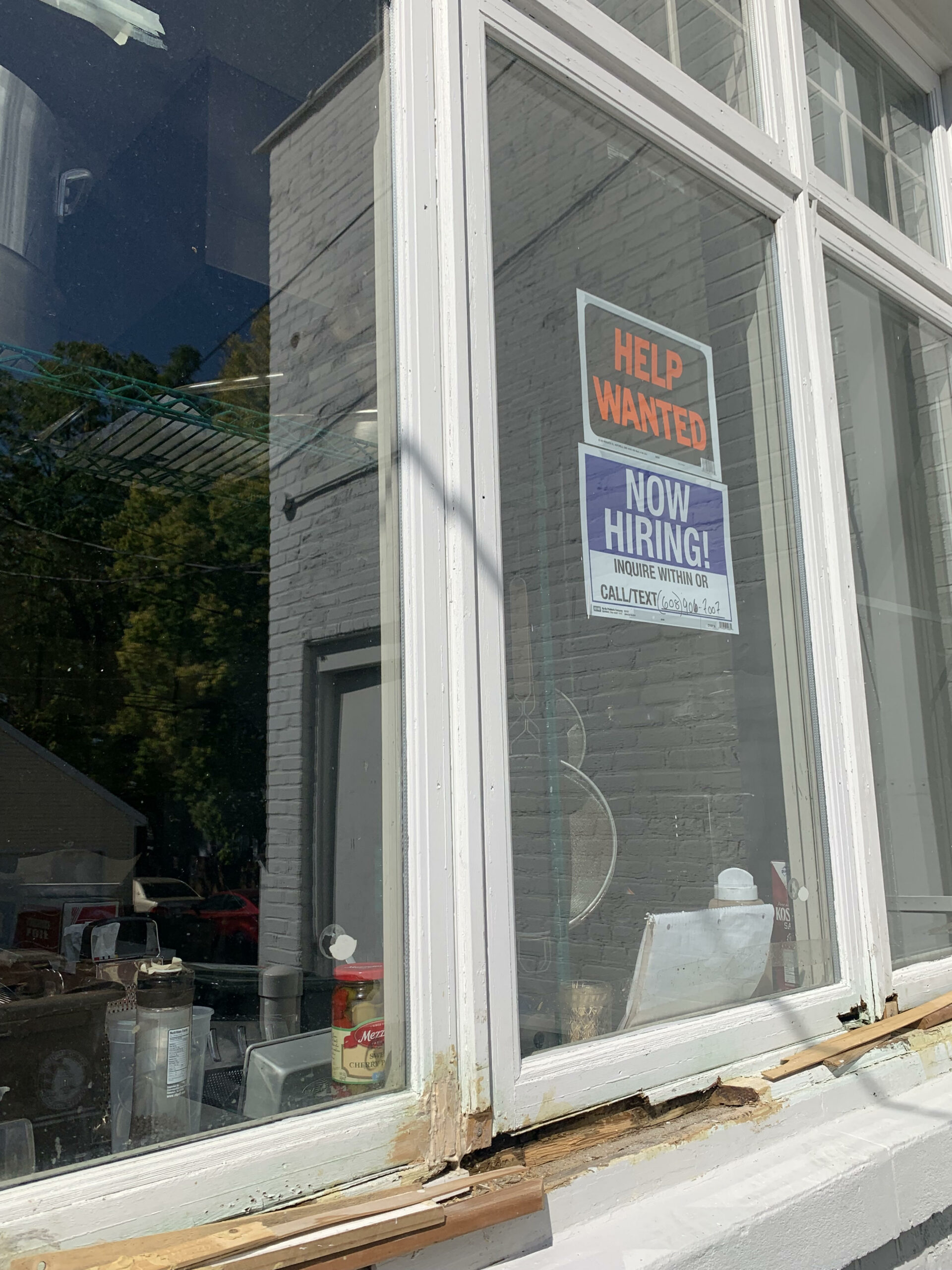 Kettle Black Kitchen is sandwiched between a coffee shop and a hair salon in the heart of Dudgeon-Monroe. Through the large window at the back of the restaurant, owner Brian Hamilton’s cherry red face is visible as he furiously mops the linoleum floor, a pot of parsnips bubbling on the stove beside him. A “Help Wanted” sign hangs in the front window.

Hamilton’s restaurant is not the only Monroe Street establishment searching for staff members. Located just a few blocks away from the UW–Madison campus, the neighborhood’s row of restaurants is peppered with similar signs.

According to the Wisconsin Restaurant Association, the restaurant industry lost 22% of its workforce on a statewide-level during the pandemic. In Dane County, that statistic is twice as high at 44%.

Facing a staggering workforce shortage in the midst of a global pandemic has made operations increasingly difficult, according to Hamilton. Within the first few weeks of opening, a COVID-19 outbreak at the restaurant forced him to close his doors for a month.

Once Kettle Black Kitchen was able to reopen, the lack of employees caused the restaurant to stay closed most of the week.

“I cannot reliably open any nights except for Thursday, Friday and Saturday,” Hamilton said. “It’s incredibly difficult to get the ball rolling if I’m closed most of the time.”

In Hamilton’s case, a lack of employees leaves him and his wife to handle most of the responsibilities of running the restaurant. In addition to performing the standard owner tasks, Hamilton and his wife execute the Kettle Black Kitchen’s social media promotions, serve orders, clean the restaurant, prep food and cook meals during service.

In neighborhoods like Dudgeon-Monroe, where locally-owned shops and smaller restaurants make up most of the businesses, the restaurant labor shortage makes a more significant difference for owners, said Wisconsin Restaurant Association CEO Kristine Hillmer.

“Your independent, small mom and pop places have less stability and resources available to them, so it’s harder for them,” Hillmer said. “They don’t necessarily have access to human resources professionals — the owners are doing that.”

The onset of the COVID-19 pandemic, including the spread of the Delta variant, is one of the key contributors to a declining workforce, according to Jackie Hall, director of quality and communications at the Workforce Development Board of South Central Wisconsin.

“We’re seeing workers, especially in vulnerable industries and those frontline positions, pivoting to other industries and occupations where maybe the pay, the schedule and the work is more palatable to what they’re doing now,” Hall said.

According to Hall, the pandemic led many to reconsider their work situations due to the vulnerabilities it presented in regards to facing the public during a global pandemic.

“A lot of people took a moment to really reevaluate what's next for them,” Hall said. “And I think we saw a number of those, especially the restaurant workers, who looked at their options and maybe decided to pursue a different track.”

This holds true for former employees of another Dudgeon-Monroe establishment, Garth’s Brew Bar. According to owner Garth Beyer, the bar had nine team members, prior to the pandemic.  Now, they are down to five.

“It’s not just the lost workforce,” Beyer said. “It’s the loss of really remarkable, talented people that have jumped to other industries for the feeling of greater security.”

“We’ve always maintained that the unemployment insurance did have an impact for some people to sit on the sideline,” Hillmer said. “But it’s a much more complicated issue than that, and that’s just one out of many factors.”

In order to combat the situation, some restaurant owners have had to implement short-term solutions to remain operational, including changes to hours and menu limitations, Hillmer said.

Hamilton pays his servers $15 an hour, which has allowed him to maintain two other employees aside from himself and his wife. Yet, the need to pay workers a higher wage poses greater problems, he said.

“For us, the workforce shortage forced us to limit our menu by removing food entirely and reducing hours to core times the majority of guests visit,” Beyer said. “I’m grateful that we have recently hired a great bar manager and have been able to expand our hours and menu again – but it took six months to fill the role that enabled us to do that.”

Looking towards the future, Hillmer says the problem may persist for some time.

“I don't see this changing any time soon,” Hillmer said. “This is going to be a long-time issue that restaurants are going to be facing for a very long time. “

In order to keep local restaurants open, Hillmer emphasized the importance of supporting those establishments, whether via dine-in or carryout.

“Communities work really hard to attract restaurants to them,” Hillmer said. “Whether it’s a small neighborhood or a small town in rural Wisconsin, we know that communities are strong by having restaurants be a part of them.”

Beyer said he remains hopeful for the future of the restaurant industry.

“It’s no doubt a struggle and stressful, but none of us got into this industry because it was easy,” Beyer said. “I think we’re all up for the challenge and this shortage is a great opportunity for us to rethink how we grow our businesses and teams back.”