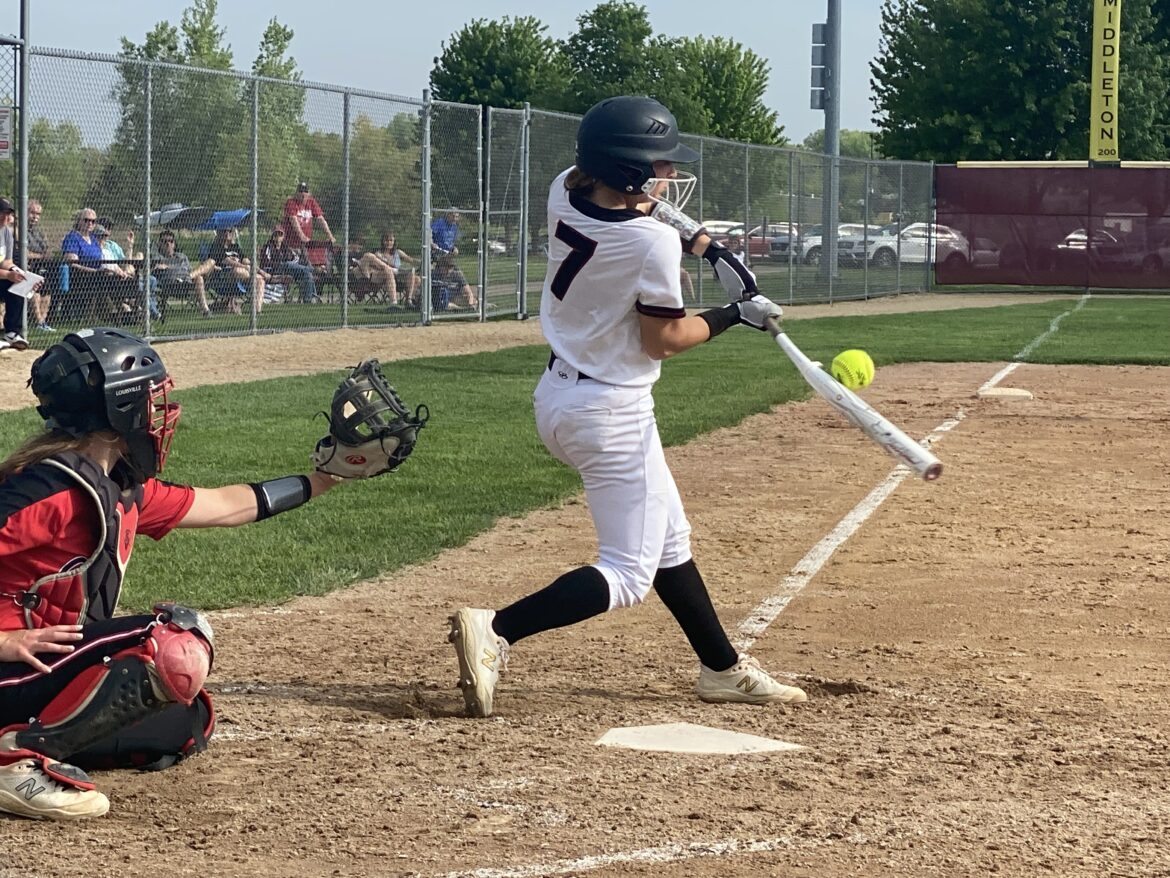 “I think this just gives us a boost of confidence going into the state tournament,” Sun Prairie junior Sophia Royle said. “Being second last year, we all just want to feel like we can have a chance to [win state]. I think this year we have a pretty good chance to at least make a run for it.”

The first three innings started off as a pitchers’ duel. Both teams averaged one hit per inning during this stretch, but failed to score any runs due to solid defense and good pitching from Sun Prairie’s junior Isabel Royle and Middleton’s freshman Megan Button.

In the top of the fourth inning, Sun Prairie caught a few breaks that led to their first run of the game. Sophia Royle led off the inning with a pop up double along the left field line just out of the reach of Middleton’s shortstop and left fielder. She advanced to third on a groundout to second base by her sister, Isabel Royle, before scoring on a wild pitch by Middleton.

After Sun Prairie’s first run, pitcher Isabel Royle and the team’s defense locked in. The bottom of the fourth and fifth innings were both three-up-three-down innings for Middleton, without a single ball leaving the infield.

“It’s just great,” Isabel Royle said. “I know I’ve got my team behind me to secure those outs. It makes it a lot easier because I just need miss-hits more than strikeouts every single batter.”

Sun Prairie added their first insurance run in the top of the sixth inning when Isabel Royle hit a sacrifice fly to left field to score sophomore Tayler Baker.

The bottom of the sixth inning tested Isabel Royle out on the mound. Middleton senior Jenna Redders led off with a triple down the right field line. The next batter got out on a fly ball to Isabel Royle and a key block from Sun Prairie junior catcher Vanessa Veith stopped the run. After the next batter was hit by a pitch, Button bunted down the third base line. Isabel Royle picked up the ball and made sure Redders did not score from third base before throwing Button out at first for the second out of the inning. The final batter of the inning grounded out to Royle who fielded it cleanly and threw it to first in stride.

Royle finished the day without giving up a single run on seven strikeouts, four hits and 81 pitches through six innings of work.

Sun Prairie put their final two runs on the board in the top of the seventh inning when Veith hit a two RBI single up the middle with two outs and runners on second and third base. The top half of the inning came to a close soon after, ending Button’s night. Button gave up three earned runs on 11 hits and 95 pitches through seven innings of work.

Middleton’s top hitter was Redders who finished 2 for 3.

Sun Prairie’s top hitters were Sophia Royle who went 3 for 4 with a double and a run scored and Veith who went 2 for 4 with two RBIs.

Matchups for the postseason tournament were released before the game. Middleton was seeded No. 6 and will play at home against No. 11 La Crosse Central on Tuesday. Despite Thursday’s  loss, head coach Brittany Carl said she likes her team’s momentum.

“This is a team in Sun Prairie that puts up a lot of offense historically and for us to hold them scoreless through four or five innings is a huge momentum builder for us heading into the postseason,” Carl said. “We’ve played two ranked teams now that were very tough in the last two weeks. We beat No. 3 Chippewa Falls and we hung right there with No. 2 Sun Prairie, so a lot of good things.”

Sun Prairie received a first-round bye andthe No. 1 seed in their section of the bracket. They will play the winner of No. 8 Baraboo and No. 9 Onalaska on Thursday.

“Our biggest thing is we’ve got to take it one game at a time,” said coach Jamie Olson. “We can’t look to who we are going to be playing two games down the road. We’ve got to be looking at what we will be facing next.”