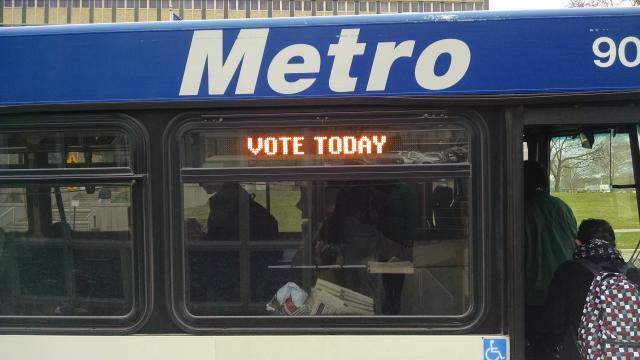 Madison city elections always take place in the Spring, and voter turnout in Spring elections tends to be lower than in the Fall. In the April 2019 election for example, only 36.7% of Madison's electorate voted compared to roughly 75% in November 2020. And the 2019 Spring election was not only for alder, but for mayor and a State Supreme Court Justice. This time around turnout may be even lower, as the Mayor is not yet up for re-election and the only statewide election is for State Superintendent of Public Instruction.

Generally, those who vote in low-turnout elections tend to be a select group who do not reflect the demographics of all eligible voters. Rather, they tend to be older and of higher socio-economic status. Of particular importance to us, they tend not to ride transit or see a reason to support it financially. One way for Madison's budget to better reflect the interests of transit riders is for more of them to vote.

A commonly recommended way to increase voter turnout is to schedule local elections to coincide with more salient ones such as the one for governor. Unfortunately, cities cannot change election law to better fit with such circumstances. Rather, election law is controlled by the state. And Wisconsin currently separates elections by whether the office is partisan or non-partisan. Alders are theoretically non-partisan whereas governors are partisan. It is time to change this but I am not aware of a campaign to do so.

Wisconsin's election protocol is controlled by a bi-partisan Wisconsin Elections Commission. Aside from the issue of scheduling partisan and nonpartisan elections together, two issues of particular relevance to voting access by transit-dependent people has been Wisconsin's fairly expansive and encouraging policy toward absentee voting offset by a restrictive and discouraging policy toward Voter Photo IDs.

On the one hand, voting absentee is available to all Wisconsin voters, not just to those in a particular age group, those indefinitely confined, or those who can demonstrate a temporary absence. This in turn enables people to vote before Election Day, whether by mail, returning ballots in a Drop Box, or by voting in person at specially designated locations. Unfortunately, witness signatures are also required, an issue particularly problematic during the pandemic of 2020 but unfortunately also made contentious regarding all indefinitely-confined voters.

Still, Madison's City Clerk has attempted to maximize the potential 'absentee voting' policy has for increasing voter turnout. Under her leadership, there are numerous secure Drop Boxes scattered throughout the city. There are also numerous in-person voting sites, many potentially more accessible to a transit rider than her/his own neighborhood polling place And for those indefinitely confined, her office generally mails out absentee ballots weeks before they must be returned.

Wisconsin's policy toward absentee voting may be expansive, but unless someone has an acceptable photo ID, she/he cannot in fact vote (except for the special circumstances of those indefinitely confined). Legally acceptable Photo IDs include a Wisconsin driver license, a state-issued non-driver ID card, special cards issued by a Wisconsin accredited university, college, or technical college and a smattering of other forms of ID.

The photo ID policy has caused an unnecessary burden on both the Wisconsin's Department of Motor Vehicles (DMV) and on the transit-dependent population. It makes sense that the DMV is tasked with dispensing driver licenses so people can drive on state-supervised roadways. The DMV's customer service centers furthermore want to provide maximum accessibility to potential drivers, sometimes at locations inaccessible or excessively inconvenient to the non-driving population. (That certainly is the case for the one on Madison's west side.)

But it makes no sense that the DMV is also tasked with issuing the non-driver ID card. That task could be delegated to county or city clerks parallel to the way educational institutions also issue acceptable ID cards or Post Offices dispense passports (also an acceptable form of photo ID). In addition to having a regular office, county or city clerks can engage local neighborhood-oriented mobile units to visit other places too, similar to the way Drop Boxes are currently sprinkled around town to augment the now- infrequent post box.

Here in Madison, The state Department of Motor Vehicles (DMV) dispenses photo ID cards at two locations. One is way out east of Stoughton Rd. at 2001 Bartillon Drive. It is accessible by an hourly bus, is open from 8:30 a.m. to 4:45 p.m. on weekdays and 8:30 a.m. to 12:00 p.m. on Saturdays. While the bus on weekdays stops close to the building on Kinsman Blvd., the bus on Saturdays does not. Metro estimates the walk then for an adult without a mobility constraint to be about 15 minutes each way.

The second Madison Customer Service DMV office is newer and even less friendly to a transit rider. It is way out west of the Beltline at 8417 Excelsior Drive. It is open on weekdays from 8:30 to 4:45 p.m. but not on Saturday mornings. It can be open at times when the nearest bus stop is over a mile away.

The DMV appears to be somewhat aware of its limitation because in September of 2020 it opened a third, temporary, office in Madison for two days a week:

This site was selected due to the population growth in the area. Dane County, with a population of 542,364, has only two DMV Customer Service Centers: Madison West at 8417 Excelsior Drive and Madison East at 2001 Bartillon Drive. This means each Madison DMV serves 271,182 residents. In comparison, Milwaukee County, with a population of approximately 948,201, has six permanent DMV locations which serve roughly 158,000 customers each. Another comparison of offices per capita, Rock County has one DMV office for every 81,565 people.

It would be nice if this temporary feeler were made permanent as long as Wisconsin continues to require that the DMV issue the acceptable nondriver voter photo ID. A part time Madison North DMV would be helpful as well. Indeed, the DMV used to have more Customer Service offices in Madison than it has now. The Evers administration and its DMV could be doing much more to enable transit-dependent  riders to vote.