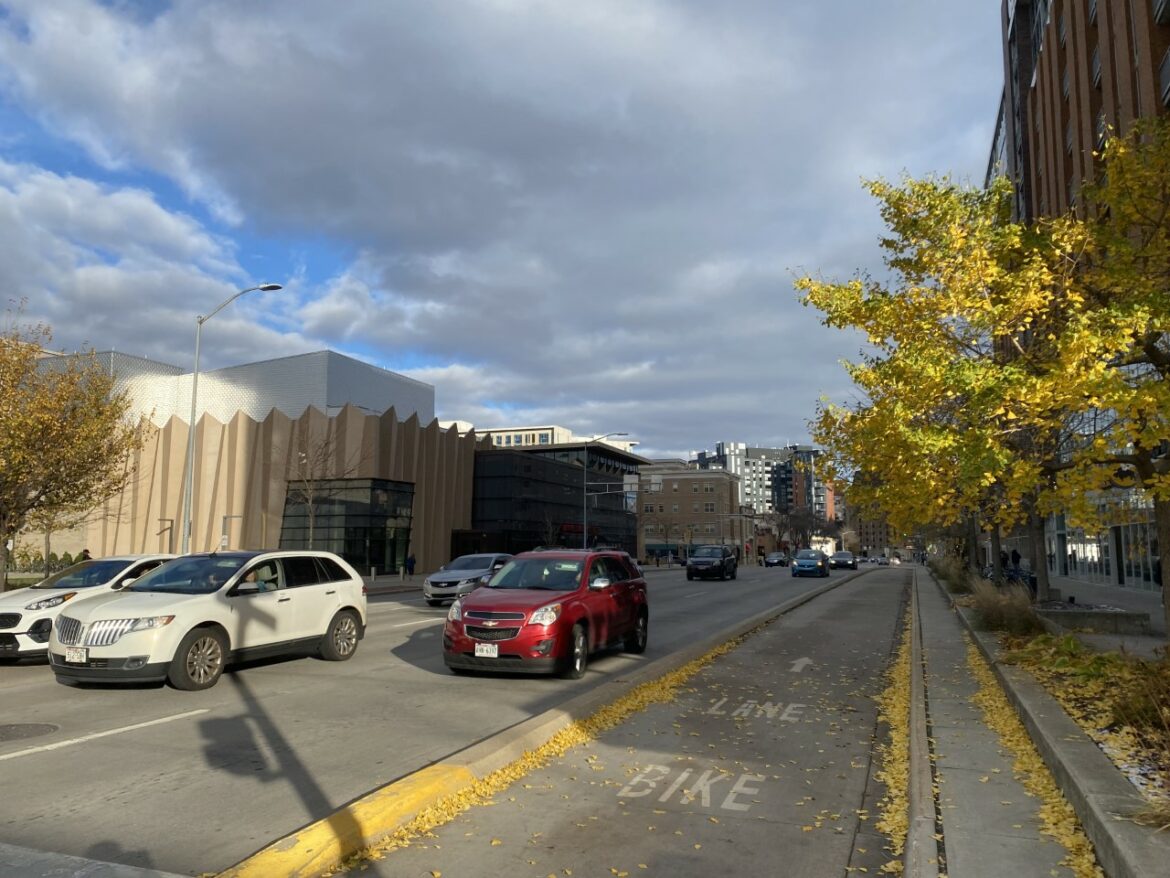 Before the COVID-19 pandemic, 71% of commuters in Dane County drove alone in a car to work every day, a percentage that dropped with the shift to teleworking.

But now, Madison-area public and private entities are searching for permanent solutions to make commuting shared and sustainable as workers return — in some capacity — to offices in a city that already struggles with street congestion. In March 2022, weekday traffic in Dane County had bounced back from 2020, but was still down 9.8% compared to pre-pandemic levels, The Capital Times reported.

“We’re very constrained in the most populated part of the city, downtown and on the Isthmus,” said Zia Brucaya, a transportation options program manager for the Greater Madison Metropolitan Planning Organization. “So the geography is really, really important here.”

Brucaya oversees the city’s Roundtrip program, a website that connects local commuters to carpool, public transit, or sustainable options like walking or biking.

Bike-pooling — or riding a bike alongside other people — and carpooling are some of Roundtrip’s most popular features, Brucaya said. While the service saw a decrease in users when the COVID-19 pandemic shifted employees to remote work, essential workers still used Roundtrip to get to their jobs.

Now, the service is expanding. Roundtrip is rolling out a new website in January 2023 with a feature that will allow users to compare the costs, CO2 emissions and travel time associated with each transportation option, Brucaya added. The Wisconsin Department of Transportation will help fund the website.

The new site will also allow companies to track data including CO2 emissions, ridership and other metrics. That data could allow them to promote their good community standing and thus have an incentive to invest in more sustainable commuting options or encourage employees to use Roundtrip’s services.

One local company that offers its employees alternative commuting options is Epic, a Verona-based health care software company that employs more than 10,000 people.

In 2005, Epic began offering its employees Metro Transit bus service to and from downtown Madison on the 55 route to its Verona office, a collaboration with the city of Verona, according to Epic facilities director Jim Schumacher. The company added a second route in 2012 called the 75 that runs to and from the West side.

“We invest heavily in solar, wind and geothermal,” Schumacher said in the email. “Subsidizing Metro routes is just another way we are green.”

But for Carey McAndrews, professor in the Department of Planning and Landscape Architecture at the University of Wisconsin–Madison, it might be harder to get employers on board for shared commuting options than with mere sustainable benefits or even cost-cutting.

McAndrews collaborated with Union Cab in 2019, a local, worker-owned taxi company, to carpool employees in taxicabs to and from employers in the greater Madison area. The pilot program, called Commute to Careers, received a research grant from the U.S. Department of Transportation and money from the Wisconsin Department of Workforce Development.

Commute to Careers subsidized taxi trips for employees commuting to their job sites in the Madison area with state grant funding and small contributions from participating employers, McAndrews said.

“If we know that transit doesn’t necessarily go where all the jobs are in suburban locations, and we know that taxis are available to do that work, then it made sense to me and Bill that we would figure out how to deploy taxis to fill this gap,” McAndrews said, speaking of Bill Carter, the business manager for Union Cab, a Madison-based cab company.

Union Cab worked closely with McAndrews to develop Commute to Careers along with other public- and private-sector groups. Carter said one of the highlights of the program was its ability to help low-income residents.

While the program was able to facilitate many rides while the grant funding was still in use, it ended around when the pandemic started, Carter said. Employers decided not to sign permanent contracts that would rely more on them subsidizing the taxi trips in the absence of government support.

“Part of the reason [employers] were having trouble attracting and retaining workers is because of this instability in the transportation access, [so] we thought that there would be shared value,” McAndrews said. “In other words, a rider would be willing to pay a portion of our ride, and we thought that firms would also be willing to pay a portion of a ride to avoid problems with worker turnover and retention.”

While the city of Madison has a series of programs designed to help local residents reach employment opportunities via Metro Transit and other shared services — like the Employment Transportation Assistance program that subsidizes bus passes for those seeking employment — the funding for them “is very limited,” Dane County’s Transportation Call Center said in an email.

Past changes to commuting patterns in Madison have come from local residents. Epic, for example, began its partnership with Metro Transit when its employees requested alternative commuting options, Schumacher said.

BCycle, a based bicycle sharing company in Waterloo, Wisconsin, has expanded in response to high ridership in the Madison area, Brucaya said. The company will add 18 stations in Fitchburg, a suburb of Madison, next year as the bike service becomes an option for residents to use for commuting in addition to recreation, she added.

“Even if we look three, four, five years from now, I think we will be in a very different transportation landscape,” Brucaya said of the Dane County area.