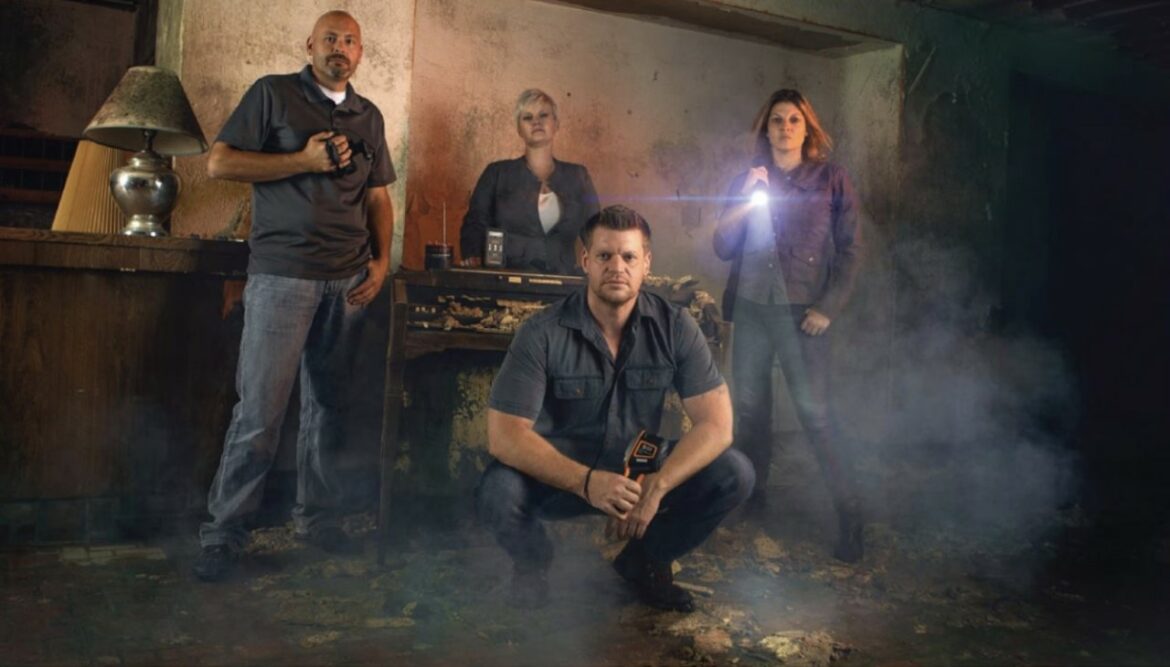 A Dane County paranormal investigation group has been hunting ghosts since 2009. But the pandemic has increased their workload by 50%.

After Renee and John Von Klopp moved their business to a new building, they knew something was off.

The couple’s dog, Duke, growled at empty corners. Footsteps echoed from the upper floor when no one else was there. A toy train turned itself on and off.

“We didn’t have chairs flying across the room or anything like that,” Renee Von Klopp said. But a buildup of small events led the couple to call Paranormal of Wisconsin, a group of four paranormal investigators based in Dane County.

Though the increased workload has been overwhelming at times, the team still uses the same rigorous investigation methods they’ve been employing for the last thirteen years, Jason Bertram said. Their free investigation services have helped close to a thousand people like the Von Klopps.

The increased volume of calls during the pandemic is likely because people are home more, said Michelle Bertram, Jason’s wife and co-investigator. When you’re at work for eight hours a day, “you don’t realize everything that goes on in your home,” said Michelle Bertram.

Plus, many people have extra time for home renovation projects, and changing the face of a residence can stir up ghosts, said Jason Bertram.

He thinks people fear ghosts far more than they need to. Most real ghosts are nothing like the ones in horror movies — rather, they’re just people who died and haven’t moved on yet, Jason Bertram said.

“They never come right out and say…what they are doing here,” Jason Bertram said. “That’s our job to gather information from them to formulate an answer.”

But skeptics have explanations, too. For one, increased stress and desire for control may lead to magical thinking, according to a 2002 study.

“As human beings, we like certainty,” said Scott Mellor, a lecturer at the University of Wisconsin–Madison who focuses on the cultural significance of the paranormal. “And now you throw a pandemic in the works and that certainty is gone.”

But belief in the paranormal allows people to regain a sense of clarity, and after so much death during the pandemic, belief in some kind of afterlife can be an enormous comfort, Mellor said.

For Renee and John Von Klopp, though, this explanation falls short. The pandemic didn’t affect them much, and besides, they had noticed strange happenings since 2018.

They finally called Jason Bertram in 2019.

“The first thing [clients say] is ‘I want to know if I’m crazy,’” Jason Bertram said. “I always tell them, crazy is a Hollywood term. You’re not crazy.”

Besides, Paranormal of Wisconsin has a rigorous process to determine whether a house really is haunted.

When a new client calls, Jason Bertram asks “a thousand questions” about their experiences and the history of the building.

The team can resolve about 70% of cases over the phone because many people don’t know how to properly identify a ghost. For instance, many callers think balls of light captured on their home cameras are “orbs,” but these aren’t paranormal occurrences, Jason Bertram said.

When the mystery can’t be solved with a phone call, the team researches the history of the building using sources like the Wisconsin Historical Society or a specialist in the area, Michelle Bertram said.

Paranormal of Wisconsin’s research revealed that Renee and John Von Klopp’s building, now home to Razor Sharp Screen Printing in Sun Prairie, was a funeral parlor in the 1800s.

Once the paranormal investigators understand the history of the building, they come to investigate with equipment like electromagnetic field detectors and recording devices.

Their gear “looks like what you see on TV,” Renee Von Klopp said. But Paranormal of Wisconsin doesn’t act like the ghost hunters on reality shows.

“We don’t just walk in your house and…hear a door creak and be like, ‘You have a portal in your basement,’” Michelle Bertram said.

Instead, they use their equipment to detect electromagnetic anomalies and talk to spirits, sometimes spending multiple nights at the same building to establish a connection. They ask ghosts questions, and though they might not hear their responses in person, they often pick up voices on their recordings when listening to them later.

Origins of the team

Once a Sun Prairie Police Department officer, Jason Bertram was injured in the line of duty and forced to retire. Depressed and lacking purpose, Jason Bertram watched a lot of “Ghost Hunters” on the SyFy channel in his time off. His wife, Michelle, and his friend and fellow police officer Scott Timm often joined him.

“When watching the original ‘Ghost Hunters,’ we felt that if Scott and I took our police skills to this hobby we could really do well,” Jason Bertram said.

The pair started Paranormal of Wisconsin with Michelle Bertram in 2009 and added a fourth member, Amanda Holzer, around three years ago.

Ghosts are people too

Like most people, ghosts just want to be listened to, Michelle Bertram said — and the ones in the Von Klopps’ building were no different.

The team visited the building and stayed overnight twice to investigate, conversing with ghosts and recording their interactions.

Once the ghosts realized the human occupants of the building could sense them, they became much quieter and less active, Renee Von Klopp said. It was clear that they were people whose bodies had gone to the funeral parlor and just wanted to be acknowledged in some way.

“It’s human nature,” Michelle Bertram said. “You have to remember that these spirits were people at one time. [Just] because they have passed on doesn’t mean that their emotions or their personalities are any different than what they were…in the physical world.”

The Von Klopps always knew the ghosts in their building weren’t trying to hurt or scare them, but the investigation by Paranormal of Wisconsin confirmed this. The spirits in the building were people whose bodies had gone to the funeral home in the 1800’s, laid to rest peacefully and respectfully.

Ghosts often develop sympathy for the people living in their homes. When they notice people are stressed, they often become more active, accounting for the rise of ghost sightings during the pandemic, Jason Bertram said.

Even skeptics like Mellor realize ghost sightings are more than just scary stories. Rather, they reveal a culture that’s trying to make sense of a world that has become more complicated and frightening in recent years.

“At the end, we’re all trying to understand the world and how it works, and we’re all in over our heads,” Mellor said.

Though members of Paranormal of Wisconsin believe in ghosts in a more literal sense, they too understand how much relief their investigations can bring, especially to people who fear ghosts.

The team loves being able to help clients — and they love the satisfaction of having tangible proof of the paranormal.

Their Facebook page is full of investigation videos, showing ghosts speaking to them and physically interacting with their equipment. They’ve also hosted events in the Von Klopps’ building, where they show an audience their videos and explain their investigative process.

“We get good evidence, [and] we get good answers,” Jason Bertram said.