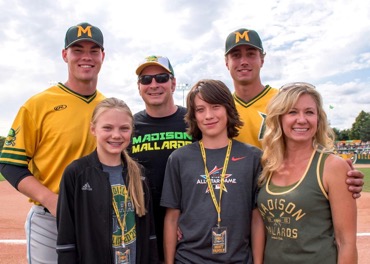 “Do you want to host a couple of ducks?”

It’s an odd question Diane Endres encountered about 12 years ago while delivering mail to a woman’s home.

“I looked at her and I said: A couple of ducks? What are you talking about? She said the Madison Mallards, and she showed me a poster of the team,” Diane said.

After sharing the question with her husband Chuck, the Endres’ said yes.

Since its 1994 inception, the Northwoods League, a baseball league that develops elite college players, has offered a host family program for each of its affiliate teams. In 2001, local business leader Steve Schmitt introduced the Madison Mallards to the league, making Madison the league’s largest host city.

Almost since the beginning, Chuck and Diane Endres have been hosting student-athletes in their home located in the idyllic countryside just outside of the City of Madison.

“It’s our 11th year in the program. We've had [players] for quite a few years and enjoyed every minute of it," Diane said.

Beginning with Tommy Lentz and Mitch Saum, Diane said she treats the players as if they were her own children.

“We have rules. If you aren't going to come home at night, I want to know. Send me a text, and for the most part they do that. It's our responsibility to make sure that they are taken care of while they're here. It's just how it is with me,” Diane said.

Since the program’s beginning there have been about 100 host families said Tyler Isham, general manager of the Madison Mallards. According to Isham each year there are about 25-30 host families, but that number varies depending on how many local players are currently on the team.

In return for hosting Madison Mallards ballplayers, the host families receive some baseball benefits. Each family receives season tickets to the games, passes for any Northwoods League away game and various goodies such as 10 hot dogs and 10 sodas to enjoy at the ballpark.

When they began hosting Mallards players, the Endres’ weren’t aware of the additional benefits they would receive.

“When we first did it, we had a son who had cancer when he was 12, and it was sort of like this was a way for us to give back to someone, to help someone,” Diane said adding that the family realized afterwards that they would receive season tickets.

From their collection of Madison Mallards bobble-heads to the giant cut-out of the old Mallards mascot hanging in the garage, the Endres’ said they are glad to share their lives with the ballplayers.

In one word, Diane summed up her experience hosting student-athletes.

The Endres have four children of their own, all in their late 30s to early 40s. Over the past few years, children have come back home to stay for temporary intervals, and Diane said this is the first time her and Chuck are truly “empty-nesters.”

Diane said hosting Madison Mallards fulfills her, and keeps their large house from feeling so empty.

Chuck simply said, “It can be interesting.”

Mallards’ general manager Isham added that currently there is a waiting list for families to host a player.

“Our host families are the backbone of our organization. Without the sacrifice they make to take these young men into their homes, the Mallards wouldn’t be who we are today. They are gracious with their time, energy and resources and provide a great home-away-from-home for these young professionals,” Isham said.

Anne and Travis Blackburn have been hosting Mallards for two years now, and they said they don’t plan on stopping. The Blackburns live in Waunakee with their two daughters, Addison, 9, and Nora, 7, and a son Carter, 11.

“Just to be partnered with the Mallards and give back by helping a college student, is important to us,” Anne said. “We feel fortunate to be able to give back.”

Heidi and Randy Hurley have been hosting Mallards for two years now as well, beginning in the summer of 2016, and they have enjoyed the experience.

“For us being a host family brought us far more rewards than we could have imagined...Our children have watched hardwork and dedication payoff. They see that there is more to hard work than just a paycheck, that doing something you love and are passionate about can bring a sense of gratitude and reward that exceeds any monetary [reward],” Heidi said.