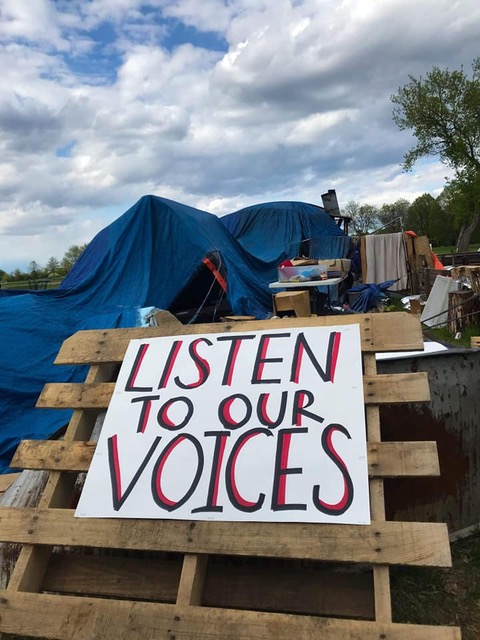 A southeast Madison site that will provide shelter to 30 homeless people currently camping in Reindahl Park is nearly complete.

The City Council approved the new site on Dairy Drive in August. It will include small, modular houses with heat and electricity, as well as bathroom and shower facilities for residents. City officials expect that the first moves to the new site will take place the week of Nov. 15.

Last week, the city confirmed that the outreach group Madison Area Care for the Homeless (MACH) OneHealth and substance abuse recovery provider Kabba Recovery Services would serve as operators of the new site.

The Dairy Drive site is being created as an alternative to the encampment at Reindahl Park, which is currently home to around 60 people living in tents and other makeshift shelters.

Incidents of violence, drug abuse and theft are common in the encampment and residents, both in the park and in the surrounding neighborhoods, have complained about feeling unsafe, according to Alder Jael Currie whose district includes the new site at Dairy Drive.

“Reindahl Park was never intended nor designed to support people living there,” said Jim O’Keefe, director of the city’s Community Development Division. “It’s not equipped to do so, so not unpredictably, the conditions at the park as more and more people moved there and began to use it as a campsite, deteriorated.”

O’Keefe, who has been involved in the process of selecting and developing the Dairy Drive location, said he hopes the new site will alleviate some of the issues at Reindahl Park, provide safer conditions for residents and help people get back on their feet so they can find a more permanent living situation.

“Dairy Drive is not intended to be a place where people live long term,” O’Keefe said. “It’s intended to be a resource that people can use temporarily on a short-term basis while they work to get connected to more stable housing.”

While city leaders are satisfied with the solution and hope that the move will mitigate problems, some of those currently residing in Reindahl Park and their advocates have a different perspective.

Pearl Foster, an outreach worker for the residents at Reindahl Park, worries that because campers haven’t been given the opportunity to add their voices to the discussion, the new site won’t be what they need.

“The city staff hasn’t been here to ask people what they want to do,” Foster said. “The people here don’t feel like they have a voice. They just feel like they’re going to be uprooted at any moment.”

“We’ve had, and I have personally had, conversations with people using Reindahl Park,” O’Keefe said. “It’s very difficult, as you might imagine, with a group of 50, 60, 70 people to get consensus around what they might think is a good solution or an appropriate response from the city.”

As for the small houses, Foster said they might not be a good fit for a lot of the residents since a significant number of them have spent time in prisons and jails.

Garrett Olson, one of the residents of Reindahl Park, has similar concerns about Dairy Drive and said he would like to have some say in the matter.

“I think it’ll create tensions. I think they’ll use it as a social thing, give [the people at Dairy Drive] a bunch of presents and then take them away slowly,” Olson said. “I’d like to see an active representative from the bottom helping out instead of somebody that’s always trying to fine or hurt someone lesser.”

O’Keefe said he recognizes the gaps in the Dairy Drive site but hopes it can still work for some people.

“This might not work for everybody, which is not to say that it won’t work for anybody,” O’Keefe said.

Many of those camping in Reindahl Park moved there after they were evicted from McPike Park in the Marquette neighborhood in February 2021. Foster is concerned that another eviction will cause additional harm to campers.

“The eviction at McPike was very hard on the people living there for various reasons. They had built a community and that community was disrupted,” Foster said. “People die when you disrupt communities. That’s what happens when you bring instability to people’s lives.”

Hatchet currently camps at Reindahl Park. (He asked Madison Commons to use his street name, and we agreed because this did not adversely affect the accuracy or context of the story.) Hatchet was one of the people evicted from McPike Park last winter and said he felt like that community was finally coming together when the encampment was broken up. He worries that city involvement could only make a hard time worse, and said he thinks it might be better for city officials to let people stay where they are.

“Don’t repeat last year and screw it up when people were almost there,” Hatchet said. “There’s a lot of people out here that care. Especially facing the winter season, finding the capacity and the will to keep people alive, okay, it’s extremely hard. In some cases, the best way is just hands off.”

O’Keefe emphasized that no one will be forced to move to Dairy Drive.

“If someone goes to Dairy Drive it’s going to be by their choice,” he said. “We will be working with MACH One and other groups to evaluate the folks that are there now and try to make determinations about who is most likely to be successful at Dairy Drive. The individual campers themselves will have a role to play in this, so it won’t be a decision made to them or about them but rather with them.”

In addition to the Dairy Drive site, O’Keefe said another similar site is in the works and will hopefully be ready in the next few weeks, although details have not been made public yet. When this new site is open, O’Keefe expects that the city will close the Reindahl Park encampment the same way they did McPike last year.

“We expect that third alternative to be available on about the same schedule, maybe a week or two behind the opening of Dairy Drive so that by the very early part of December, there will be other alternatives for Reindahl,” O’Keefe said. “It is my expectation that, at that point, staying at Reindahl will no longer be an option available to folks.”