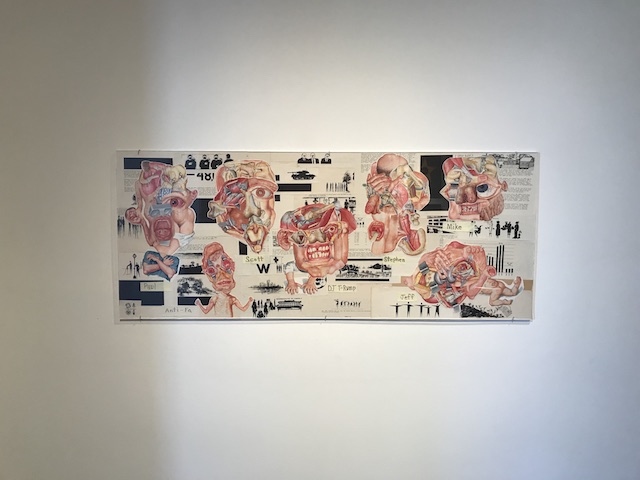 It all started with a single poster.

Local artist, and now curator, Peter Kursel, was attending a party in the Riverwest neighborhood of Milwaukee when he noticed a World War II propaganda poster hanging on the wall—it belonged to his son’s roommate.

“A careless word…another cross” framed an image of a white crucifix that indicated a soldier’s grave.

The poster led to an entire collection of similar prints and planted a seed for what would become Shhh…, a multimedia art exhibition currently on view at the Arts + Literature Laboratory located at 2021 Winnebago St., in Madison. The show blends the historical poster collection with contemporary pieces by artists from across the nation, and illustrates how art can construct, critique and contribute to our democracy. It is on view from 12 p.m. to 4 p.m., Tuesday through Saturday, until March 3.

The title, Shhh…, arose from an overarching message put forth on many of the World War II posters—U.S. citizens were advised to keep quiet about military movements and strategies, out of a general fear that enemies would intercept the information.

Some particularly striking pieces in the exhibition include:

“She literally went through the process of extracting the red, white and blue,” explained Peter. “That, in itself, is a political statement.”

And, Kursel’s very own Dicks on Parade—a collage that uses watercolor paintings by surgeon and medical illustrator Frank Netter to depict political leaders.

“I’ve had these series of heads that I’ve painted over the years… and so it just occurred to me that I would start to try and construct a head out of the Netter illustrations,” said Kursel. “As I put one together, I was like ‘Oh my god!’—this one just started looking like Trump.”

Overall, Kursel has received positive feedback about the exhibition, and a few New York galleries have expressed interest in showing it in the future. However, one particular comment, relayed to him by a friend who attended the opening reception, has stuck with him.

“[Someone] looked at my collage piece and said, ‘This is f’ed up,’” said Kursel. “I took that as a compliment. I think, in a sense, the whole show is really f’ed up and that it’s challenging your sense of what art is. What’s art’s role?”