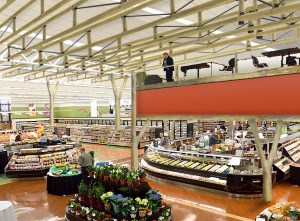 This story originally appeared in the Simpsons Street Free Press. It was written by Amanda Welch, an incoming eighth grade student at Sennett Middle School. Amanda has been with Simpson Street Free Press since elementary school with one of our other publications--Glendale Free Press. She has continued on her writing by joining Sennett Free Press. Besides having an interest in reading and writing, Amanda enjoys practicing the violin.

Most buildings nowadays are made of metal. However, the new Festival Foods located on East Washington Avenue took advantage of another organic material: ash and red pine trees.

Ash trees in Madison were afflicted with the emerald ash borer disease and were required to be removed. The emerald ash borer, an invasive insect, destroys North American ash trees. The insect’s larvae feed on the tree's xylem and phloem. This cuts off important water and nutrient flow in the tree, causing the tree to die and ultimately be sent to the wood chipper.

Red pine trees are usually used to make paper. One red pine tree can make about 1,000 to 2,000 pounds of paper. However, the rise of paperless processes has led to a decline in the paper industry.

Amelia Baxter is the co-founder and president of WholeTrees Architecture and Structures, the company that was responsible for the construction of Festival Foods. In an interview with the Wisconsin State Journal, she states that most trees used in building are from Montana but in this project, about 60,000 to 80,000 pounds of trees are from Wisconsin. The trees are about 30 to 50 feet long. The ash trees became the support columns and were stripped of their bark and fabricated with patent-pending steel connections. The red pines became the ceiling joists. Around 600 trees w

Festivals and WholeTrees benefited from a terrible tree disease. This changed the way structures are made and paved the way for other structures to be built in similar ilk.ere used for 295 parallel chord trusses and 34 support columns.