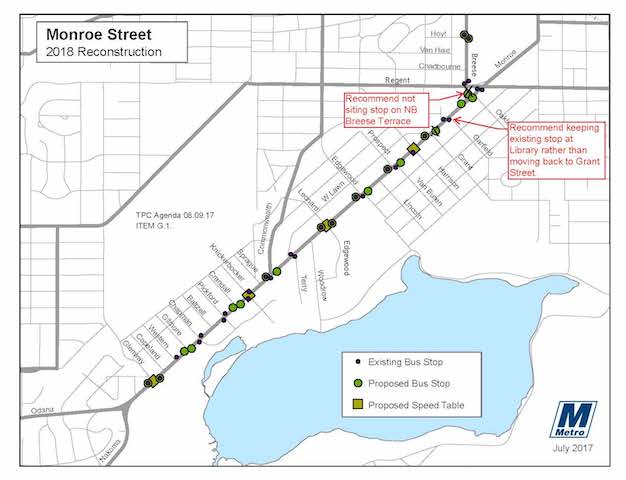 Even the best built roads have a lifetime, and many of Madison’s older streets have either been, or will soon be, reconstructed or resurfaced. The price tag? Millions of dollars, and not having that money to spend on such “quality of life” items as golf courses, skating rinks, playground equipment, sidewalks, extended library hours and more. Wide roads in particular are expensive and built as part of what Charles Marohn calls a “Ponzi Scheme;“ a short term illusion of wealth in exchange for enormous long term liabilities. Those roads are old enough now that we are beginning to finally see some of those “long term liabilities” while newer growth is still in the earlier “illusion” stage.

This column focuses on just one of those older streets in need of reconstruction: Monroe St. A major arterial road traversing roughly 1.7 miles on the Near West side between Nakoma St. and Odana St. on one end, and Randall Ave. on the other. Monroe St. is scheduled to go through major construction in 2018 at an estimated cost of $17 million; an average of one million dollars per tenth of a mile. An expensive project, the reconstruction was postponed once and almost twice, which is something to remember when you are told that the city cannot afford a golf course, an additional police officer or additional bus service. The Monroe St. reconstruction and resurfacing project involved years of neighborhood meetings, a major city-wide survey and countless hours of professional time of both city staff and various consultants. Despite all the input and talent that could have helped move Madison’s transportation system into the 21st century, the project will only make minor changes to what exists today. After all the talk and analysis, there will be no new bicycle lanes, only a few pedestrian improvements, several bus stops removed, and the continuation of two street lanes for cars each way: one driving lane and one lane for car parking except during commute hours. What better testimony to the power of entrenched and unimaginative car-centric interests despite the neighborhood's’ willingness to engage in what is supposed to be participatory democracy.

Regarding the elimination of bus stops, this move is a continuation of a campaign going back years that is based on outdated information about bus stop spacing contained in the 2013-2017 Transit Development Plan. An engineer who has since left the Madison Area Transportation Planning Board (MPO) applied a measuring instrument to a map to space bus stops a quarter of a mile apart without regard to why the stop was where it was. In the case of the East Johnson Street reconstruction of 2014, one of three stops proposed to be eliminated was directly outside an agency serving developmentally disabled individuals, many of who rely on Metro. Had the transportation planner bothered to find that out? No. Had Metro consulted the agency? No. The stop stayed because of public outcry, media coverage, and Metro ultimately backpedaling.

Similar thoughtless bus stop “thinning” (Metro’s term) was proposed in an older densely settled area of Madison when Jenifer Street underwent reconstruction in 2016. At a neighborhood meeting, Metro supposedly told people what was going to happen; they did not label their plans as proposals though they technically were plans. At the meeting, the three stops Metro said would be eliminated included one serving the neighborhood community center (WilMar House), a second serving the headquarters of the Wisconsin Council of the Blind and Visually Impaired and the third serving the Social Justice Center. The district’s alder, officers of various neighborhood associations, and a petition signed by numerous neighborhood businesses all opposed the removal. In the end, the removal did not happen.

Unfortunately, Metro did not learn from these experiences but proceeded to make similarly thoughtless recommendations with the reconstruction of Monroe St. Madison Commons ran an informative article outlining the public hearing that ensued. Perhaps most egregious of the various deleterious proposals was for the elimination of the in-bound bus stop directly in front of the public library and the out-bound stop on the other side of the street in front of a large apartment building, The Clarendon. While the stop in front of the library was a simple unsheltered post, the would-be passenger could wait out of the elements under the library’s lighted overhang or even in its heated interior.  Another of the ill-considered proposals was to relocate a well-positioned bus stop from one side of the intersection of Breese Terrace and Regent St. to the other, making it much more difficult to transfer buses, and eliminating a number of parking spaces in front of businesses.

After considerable public comment both at a public hearing and through email communications, initial proposals were dramatically modified. In the end, a set of bus stops that were not proposed to be moved were eliminated because they were not well used (at Edgewood Ave.) while the bus stop in front of the library was ultimately kept. The reason most of the proposed changes went through however, was that despite all the supposed neighborhood meetings, the area’s alder did not seem to care. Unlike Alder Rummel’s active opposition to the proposals on Jenifer St., Alder Eskrich’s silence was deafening.

The most perverse aspect of all this is that the “thinning” is being proposed in the name of “transportation equity.” As if bus riders in older and more densely settled areas of the city deserve to be punished for the awful land use decisions of city officials and planners begun over half a century ago.  Supposedly more affordable housing has been, and continues to be, located in sprawling areas on the outskirts of town where everyone is expected to drive. But how is it that bus riders anywhere are not second class citizens in an auto-centric society? Why cannot we “lift all boats” and improve our public transit and land use systems instead of “divide and conquer?” We could if we broke away from the Ponzi Scheme.