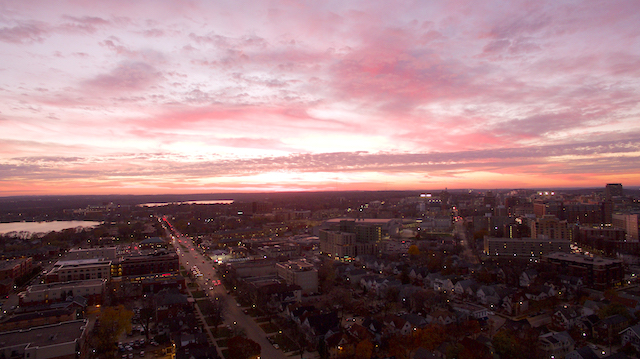 The reason for this column is the supposed lack of newsworthiness of transit issues in Madison. We say “supposed” because what journalism students are taught in a for-profit media market and what the situation might be in another context could be very different. Currently however, though public transit is an integral part of what makes Madison, Madison. It is usually just ignored or taken-for-granted, either way under-reported.  The only times it may appear in mainstream media are when fares rise, an accident occurs or service gets cut, as most recently appears to be the fate of our beloved “above and beyond” paratransit service for disabled people. Such negative exposure conveys the notion that public transit is problematic rather than the treasure it really is.

This was brought home recently when listening to a UW-Madison journalism student speak about transportation equity. To him, transportation equity was mainly a matter of fair prices whereas in actuality it is so much more. In the August column for instance, we suggested in part that having an intercity bus terminal part of the redevelopment of the Alliant Energy Center was a matter of equity. We asked why Dane County supported an airport where travelers were afforded all kinds of amenities including bathrooms and heat-controlled waiting areas with seats, while it provided nothing for intercity bus riders who had to wait for their bus outside on the sidewalk. Indeed, almost every one of our columns raises an equity issue of one kind or another. But if someone just reads or listens to mainstream media, how is she or he to know why transportation equity matters?

Budding journalists are taught that the key elements of a publishable story include such characteristics as impact, timeliness, proximity, prominence, conflict or novelty. There are good examples of reporters weaving these key elements into transit stories, but examples from local media are few. For example, a journalist in Vancouver touched on transportation policy and equity in a story about a father who allowed his children to ride the bus unattended, a decision that could cost him custody of his kids. In another story from the northwest, a journalist reports on how the city of Spokane spends thousands of dollars per person on transportation but that only an infinitesimal amount of that goes to fund public transit. Overall however, transit issues get relegated to specialized trade magazines, blogs, or hyperlocal news platforms, not mainstream media.

Instead, students learn that high-impact stories tend to cover conflict and scandals between officials. In the transit world, fare increases and route changes affect people directly. Broader effects, such as the role of public transit in socioeconomic development is less tangible and more difficult to explain. The complexities of transit's effects on community detract from the strength of its impact.

Students are taught to value timeliness, that “news” needs to be new. Unfortunately, transit “news” usually lacks timeliness because many updates are incremental. Decisions coming from city, county or state bureaucracy trickle in at a slow pace with every committee meeting or budgetary update.

What do journalism students hear about proximity? Proximity is used to highlight and take advantage of personal connections and ties to a story. Transit capitalizes both on geographic and emotional proximity to community members, as it both transports people locally and facilitates their everyday routines. However, such proximity can also make it too narrow, too local. Changes to routes, overcrowding and bus frequency is proximate to only a niche audience of those who use the specific routes in question, and framing transit stories to capture the interests of broader audience is often challenging.

Or consider the prominence attributed to someone riding public transit in a car-centric culture. If “prominence” is ascribed to someone held in high esteem such as a celebrity, is riding public transit something to be emulated or dismissed as eccentric?  If prominence is also attributed to something with immense power such as a massive corporation, does riding public transit provide an economic benefit to the corporation and warrant promotion or would it depress profits and jobs? Unless a powerful politician or public figure attaches themselves to a transit issue, it is difficult to apply this characteristic to the subject. Madison’s Metro Transit has suggested that our politicians hold “office hours” or “listening sessions” on buses, but these occur too irregularly and often go under-publicized.

What about the key element of conflict? Sports and political debates can serve as newsworthy conflict. There was plenty of news attention paid to the feud between various legislators and the Governor over transportation spending in Wisconsin’s recently passed biennial budget, but the conflict had nothing directly to do with transit. News articles had to do with borrowing for large highway projects, and the horse race style coverage of the winners and losers of these projects.

Finally, we arrive at the element of novelty, the idea that a reader is drawn to something unexpected. The traditional view is that the general population hardly considers transit news novel. Public transit may be a setting in which a heartwarming story or unusual occurrence takes place, but transit issues themselves lack a sense of oddity that novelty requires.

If a story has to include one of the aforementioned elements, formulating and creating transit related news becomes a challenge that only can be met by creative and innovative approaches to journalism.  It also becomes essential that advocates capitalize on the occasions in which issues of public transit intersect with one of those key elements in order to maximize audience interest. It’s essential for journalists and advocates to find links between Madison’s existing or potential bus system such issues as housing, employment, household budgets, public health, social equity, environmental sustainability, fiscal responsibility, land use planning, public education and so on. To us, those are the fundamental elements on transportation issues that help create an informed citizenry.