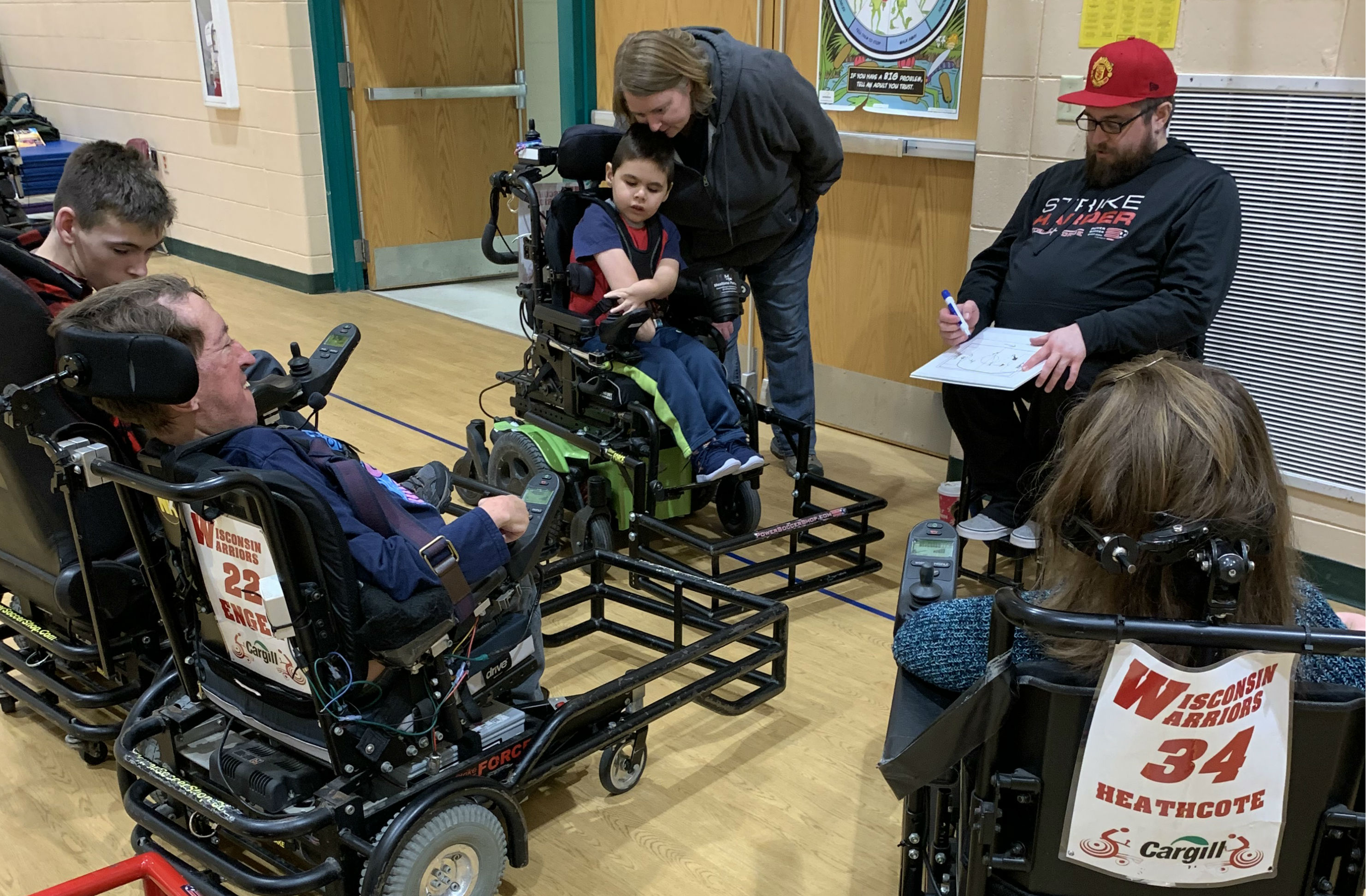 “I’ve known most of the team as they’ve been growing up,” said Engel, who has been playing for 15 years and was a founding member of the Warriors in 2008. “We started this team with the dedication that we want to win, we want to move up conferences, we want to play at the highest level possible.”

Coaches for adaptive sports teams are typically parents of players, with minimal initial knowledge of the sport, so having a coach as involved as Schultz -- who uses a power chair and has been involved in adaptive sports as a player for many years --  really makes a difference in team morale, and their commitment to demolishing the competition.

The sport itself is designed to be man-on-man and open-style, Engler said, so the players’ skills are at the forefront, rather than simply who is the most powerful or strongest. Each player must strategically position themselves, angling the guards — cage-looking extensions on the front of each powerchair — in a combination of physics and geometry to ensure that each pass and shot ends up barreling exactly where they intended.

Even as the defending national runners-up, Engler isn’t surprised at a lack of attention their success and the sport more generally receive.

“Everyone knows about wheelchair basketball, but other than that, there are no other disabled sports in the public eye,” said Engel. “A lot of sports for people with more severe disabilities are [about] pity, you always win… but I found out pretty quickly that it’s not that, it is just like any other sport.”

There’s a lot of misconceptions surrounding adaptive sports, many of which perpetuate harmful notions of what it means to be an athlete with a disability.

“There’s a lot of this, ‘oh no, these poor disabled kids, it’s so inspiring,’ all of that. It’s not the same with any other athlete in our field,” Engel said. “You can’t just go in a chair and do what we do.”

Among the power soccer community, the Warriors are notorious. They frequently are ranked highly, are featured for top goals at tournaments, and have acquired a bit of a following — especially among Forward Madison’s supporters’ group, The Flock.

“My first thought was that this would be a great partnership for the Warriors, and it has been so far,” said Engel. “Everyone involved is awesome there, they are super accommodating, and really back up what they say about inclusivity.”

If you were to ask any of the Warriors about their most memorable experience since being on the team, though, you are more than likely to get the same answer.

Last year at the national championships in Fort Wayne, after five overtimes, a few nearly-dead chairs, and 75 minutes of adrenaline and excitement, the Warriors took home the second place title, and are bent on placing again this year.

Until then, however, they reminisce about old games — getting yelled at by referees for celebrating too much after a goal, accidentally launching balls a bit too high into the air — while practicing hard, smashing stereotypes, and preparing to shred the court playing the game that they love so much.

“There will always be people stuck in the past,” said Engel. “And you always have to fight for any little thing that everyone else takes for granted.”

The Wisconsin Warriors will host several teams from around the midwest at their next tournament, the Spin Kick Classic, on January 18 at Token Springs Elementary in Sun Prairie.